Another lonely weekend. Ok, not true. Another weekend without any plans with other people. I have plans for myself--grocery shopping, cleaning the house (a little), knitting, consuming media. Should I go to the movies? Should I take myself out for a drink later? I wonder why I never/rarely have plans on a Saturday night. I don't feel bad--I'm not sad or lonely--but it does seem odd that this is so normal for me these days. Maybe I'm just not that sociable? This week, I was able to go back to knitting group for the first time in almost a month and I was really looking forward to it. It felt so good to be around a group of companionable people. I told some stories, I listened to some stories. The group keeps shifting so each time the mix and dynamic is a bit different but usually it's good and friendly. We haven't had any awkward moments for years.

I did have a "date" on Thursday. A quick drink with a guy who I first met online years ago who randomly contacted me earlier in the day. In fact, he'd mistaken me for someone else. He was embarrassed; I was amused. We decided to meet. He didn't have much time but I enjoyed meeting him and he was quite good looking and interesting. He's not boyfriend material (you have to trust me on that), but he might be somebody I could spend some time with. I'm also planning a date with another guy for next week.

Here's the thing--all of these dates are during the week. A lower committment, less meaningful time. And maybe these guys have weekend plans...I mean, I do too, sometimes. For example, I'm going out of town next weekend. So there!

I am also slowly stepping up my fitness. Goodness it's a slow process. I let go a lot in November and December. I think I'll keep my slow and steady pace through January and maybe try the jogging thing again in February. I've never liked running, but now I kind of miss it! What is that about?

What else? I've been really good about the cooking thing. I know I can't keep it up forever--the question is, when I slip, how long will it take me to get back on the bandwagon? The other problem is that I don't like a lot of recipes from the service I'm paying for. They're ok but not great. I don't know what to do about that.

What about a picture? Here's a scarf I'm knitting at my niece's request. This is kind of a funny story. I was in Israel, I was talking to my niece. She mentioned the scarf I knit for her about six years ago--at that time, I made a scarf for everyone in the family--well all of the girls. I later made a scarf for B2 (brother in Israel) and one of my nephews-in-law at his wife's (my niece's) request. So a different niece says, "Remember that scarf you made me? My husband really likes wearing it!" Short pause. I said, "So...does that mean you need a new scarf?" She smiled and said yes. I kind of love that. So we talked about the color etc. The next day, I saw her again. She says, "I told my husband you were going to knit me a new scarf and he said he'd like a new scarf too!" Ha ha! She's lucky that she's my favorite (ok, not really--but her husband is a great guy and he might actually be my favorite of the three husbands so far). He liked the color of the yarn I used for the hedgehog for their infant son. When I got back to the US, I went searching online and the yarn below is what I'm using for one of their scarves. My niece likes this color too...but I decided not to make two scarves from the same yarn. 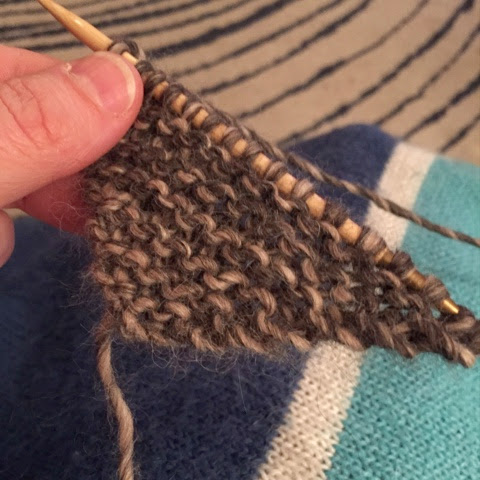 This is the yarn for the second scarf. They can decide amongst themselves which belongs to whom. Or maybe they'll just share! 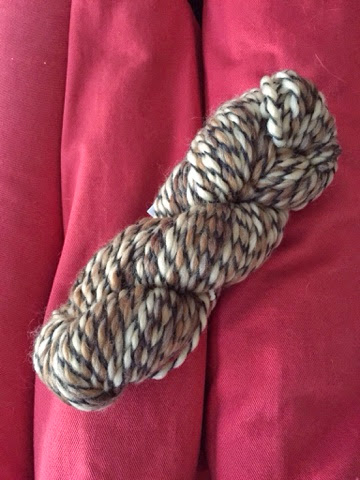 Here's a sweater I knit over a year ago, but I did some repairs to. I just added that ribbon and new snaps. I'd used the press-on snaps and they damaged the yarn. You can't see it in this pic, but I also added about three inches to the sleeves. So much better now. 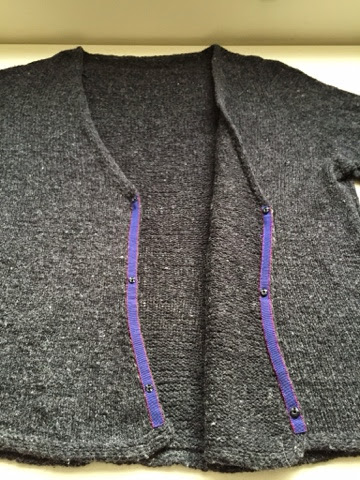 At least it's a good time for knitting!

Grateful for: time for myself.