As a rule, I don't make New Year's resolutions. I do sometimes contemplate them. For example, I thought I would try and blog every day. Just put up a picture, a quick word, something. But I never follow through on things like that. I chafe when put that kind of pressure on myself. I'm less likely to do the thing I want. This is kind of a resolution--to do more cooking at home. I had a phase of it this spring but my summer and fall traveling messed up the routine. Now that I'm back from my long vacation and getting into my daily routine again, I've managed to cook for a full week. (A funny thing--as much as I like to travel, it really messes me up at home and at work--I take forever to get back to normal.) I have most of the ingriedients for next week's dinners too. I'm using one of those meal planning services and that seems to do the trick. I get a menu of four meals every week. I chose two last week and two this week. Then I make extra and I get some lunches and dinners out of it. I still eat out a couple of meals, but much less than before. And much fewer frozen meals--which are decent tasting these days but wasteful (packaging) and expensive for what you get. Plus I feel like a stupid kid eating that stuff when I know how to cook. Sure, it's a drag cooking for one--but you get lots of left overs, which I don't mind eating at all. I am not naming the menu service--maybe I will later--because I don't love the recipes. They're ok, but often something is just a little off. A sauce that's a touch too sweet or that ends up too soupy. Mostly the flavors are good, but I have to do a little more improvising to get things right. And the prep instructions are terrible! The owner of the site has these sweet little prep videos, but her technique isn't great. I would like a lot more written instructions on exactly how things are meant to be prepped (diced, chopped, etc.). But, the genius of the thing is that someone else decides on the menu. That really is the hardest part! The site also has gluten-free, paleo, and vegetarian options. I'm trying out the paleo versions and I actually like them a lot better than the "regular" style--which usually have lots of rice and noodles, which I'm fine with skipping. I also have a regular breakfast I'm eating now, which I don't seem to get bored of, so that's a third of the day right there (blueberries and/or granola with yogurt). I'm even making coffee at home most days. Not every day. None of this is to save money, but to make eating more enjoyable and a bit more under my control. Enough of that. 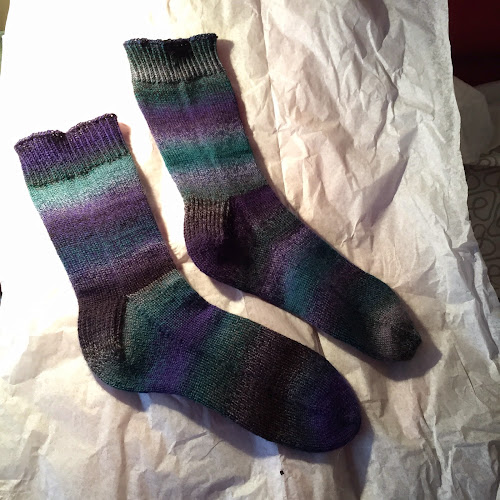 I knit my mother a nice pair of socks that I finished just in time for her birthday. She was pleased with the socks but not so happy with me. I went off on that long vacation to see family--but not to see her. And I didn't call her while I was away. And I guess I waited too long to call her after I got back. And it was her birthday, which is on January 1 and usually not a happy day for her. For many years, I made a particular effort to be home in Seatttle for her birthday. I'd find a restaurant open on New Year's Day (not that common) and take her to dinner. Or we'd go for a nice long walk. Or something. But a while ago, I stopped. It didn't work with my job and my life in DC. I always call her, of course, and for a while that was enough, but not this year. Anyway, the socks are nice. Hopefully, she'll forgive me. Our call on her birthday was terrible. She just had nothing to say and I when I started talking (about work--sigh), she cut me off in frustration. I asked questions but she wouldn't be drawn out. I love my mother but she can be difficult. I won't give up.

Last, I did go to a party on NYE and it was fun. First time I've been to a NYE party in a million years. It was at the in-law's of a not very close friend who I know through knitting. I had no expectations other than it would be odd. It was odd. But there was plenty to eat and drink and we danced. Dancing is good. I drove home after two in the morning, but it was fine. No traffic at all. I slept well and had a lazy New Year's Day--though I did manage to take a nice long walk. I also nearly finished knitting a scarf (per request) for Pele. Today, it is done, just in time for her birthday! I'm on a roll. I also came back from Israel with four knitting commissions (two scarves, a pair of socks, and a vest). My nephew's wife is pregnant, so a new hedgehog has to get on the needles. That was kind of funny--this time it wasn't nearly as much fun handing out hedgehogs because all of the recipients were infants. Toddlers are a better audience for stuffed animals. 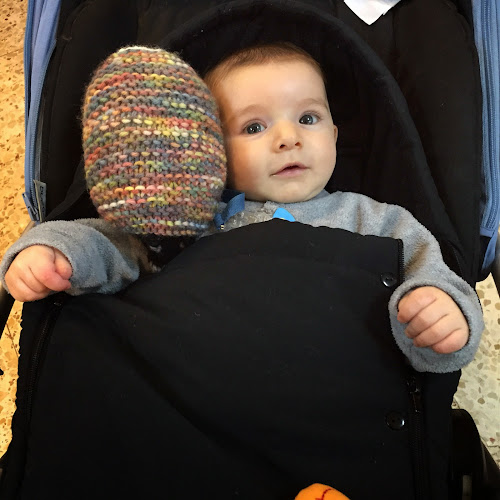 Grateful for: a more or less happy new year.