Back to a coffee shop routine. I managed to make it out this Sunday morning before the real crowds showed up. I'll head home soon too so I can finish my laundry and do a little knitting before our condo work afternoon. That's right, I actually corralled my condo-mates into committing two hours to clean up our back yard. This was prompted by our very annoying absentee neighbor's email about how messy things were. This is the guy who is renting out his unit. He also suggested that we revise the parking assignments becasue the people I rent my second space to are blocking everyone else in. Except I haven't rented out my second space since November. Don't let the facts get in the way of your chiding, asshole.

Anyway, that's all good. Work is all good. Friday, I went to an interesting talk and had dinner with friends. Yesterday, I slept late, watched stupid movies, read, and knit. Late afternoon, I went grocery shopping and cooked dinner. Even later, I saw a guy. This is a guy who I've been out with before but it was a while ago and we just reconnected. I steer away from certain kinds of details on the blog since I'm not completely anonymous, but I am so annoyed at him. I just want to know when a particular intimate activity became something that wasn't considered "vanilla." I have noticed that how people define "vanilla" varies wildly. The use of that term is kind of a new thing too (like the expectation of no hair anywhere). Many years ago, I remember having a conversation with Audrey about what was considered "kinky." We decided that "in these modern times" even anal sex was only borderline kinky, though obviously not to everyone's taste. That meant that most varients of intercourse and oral activities weren't kinky--and if something isn't kinky, it's vanilla, right? Well, this guy who I saw yesterday seemed to think that only manual activities and intercourse are vanilla. He even said, "I'm pretty normal and conservative about this stuff. A lot of guys aren't into it." You know what "it" is now, right? I just...I don't know what to say to someone like that. Ok, I do know what to say, which was, "A lot of guys ARE into it. It's pretty important."

I've recently read a couple of romance novels...I know, it's so not me! But the quality of the writing is acceptable and they're...romantic...and a little sexy. Some of the situations are anachronistic, but it's still fun. These are historical romances and it's a little hard to believe the amount of oral action these 19th century ladies are getting...but I kind of wanted to make him read these books. This is the core of these books--how exciting and pleasurable that activity is...that entire books put the emphasis there instead of on intercourse. I know some women say they're not into it, but my (overly judgemental?) opinion of those women is that they're not in touch with their sexuality, which is unfortunate. I understand how that can happen. It's hard to let go and enjoy yourself. Sex in general leaves one feeling very emotionally open and that's hard for a lot of people. But c'mon--it's a whole trope in discussions men have (or the ones on tv, movies, and jokes) about how they want oral sex. It is so weird to acknowledge that women want it too? If you're not willing to even try to give your partner what they want, you are a lousy lover. Anyway, I was super frustrated with him and his line of non-reasoning. I really need to find some different guys! Where are they hiding? I'm finding guys, but they're just all wrong for me--and, not very right for anyone at all, as far as I can tell.

Did I go too far or just far enough? Sigh.

Anyway, here's a knitting pic. I went up to NY/NJ last weekend. I gave my niece the socks she asked for last year. She put them on immediately and didn't take them off all day. That's just about the highest praise a knitter can get. My SIL also sent me home with a commission for stranded mittens. That will be fun. 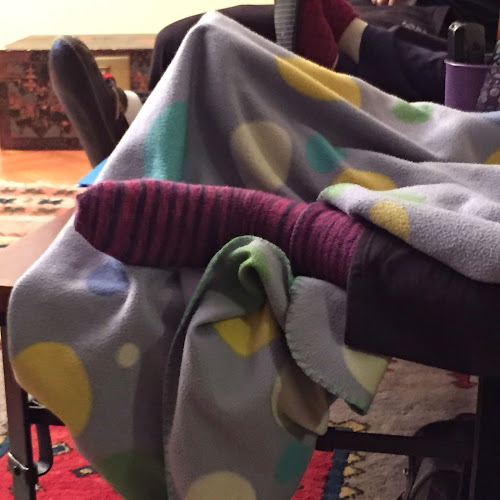 It would be so great if you could tell me I'm not crazy, but I'll keep my expectations low.