I've been itching to post yet I haven't. Sometimes I wonder if I've given up the blog without realizing--or acknowledging--it. But, maybe not quite yet! I'm days away from the official ten-year mark, and I won't end things before then.

What I have I been up to? Perhaps the title tipped you off--I'm on vacation. A real one this time. Or I should say, an almost real one. The last couple of days, work seeped in a tiny bit. It hasn't bothered me. I'm not sure why not. Maybe because the interference isn't stressful at all. It's more like...they need me. I'm a sucker for that--always have been. I like to feel needed. I was annoyed too because one of the issues was somthing really minor that my seconds-in-command should've easily been able to handle (interpreting a comment from our client), but they were really failing so I stepped in to tell them what I thought it was about. An email was sent to our client asking for clarification and her answer wasn't helpful at all--mostly because she didn't understand why we were confused. I stepped in again, writing directly to the client and explained that we could interpret her answer in two ways, and which way did she mean? Hopefully, that will be that. The other thing is a memo, the need for which arose the day I was leaving town. That was REALLY stressful. But now that I have a copy of the memo, I read it calmly and can provide some comments and it will all get settled after I get back. As it should. You know, it feels really good to be good at my job. And while I do wish I didn't need to step in, I'm also not that fussed about it. Besides, "need" is a relative term. This would all get handled without me. Maybe not quite as well, but well enough. More than adequately, I suppose. Ha ha! Am I vain or what?

More interesting, perhaps, are my travels. First, to London (well, a town 45 minutes away by train), to see my friend Alicia and her family. We had a good time. I went into London each day of my stay, somewhat unexpectedly. The first time was to see some cousins, who I'd discovered were in town. One of them (my first cousin once removed) had just had heart surgery. Apparently he'd had a heart defect since he was born. Now he's in his early 30's and it was time to do something about it. His aunt (my first cousin) was there to help take care of him and his sister arrived when I was there--we all had dinner together. He was up and about when I arrived, but still weaker than normal and not allowed to carry heavy things. He also got tired pretty quickly. His father, both sisters, an uncle, and girlfriend, had been around at different times to help and keep him company. His mother actully died about six years ago--when I was living in Paris. Her death is still something of a mystery--she had a bad stomach ache, when to bed, and never woke up--but unrelated to the heart thing. Anyway, that's why she wasn't there. I have to say, this kind of situation is when you really need your mother, but at least he had all of the other family around to watch over him. Of course, I wanted to see him too, though I think it had been about 18 (!) years since we last met. I saw them more often when they were really little--summers in California--and at least a couple of times when the family lived in Oregon and I was in Seattle. But they moved to Missouri, I stopped going to California as often, and we didn't see each other unless there were a major family gathering. Anyway, it was good to see all of them and do a mini-cousin reunion in London. I sure didn't expect that!

The next day, I went to town again on my own to see a knitwear exhibit at the Fashion and Textile Museum. See my illegal picture below. The exhibit was pretty interesting--but I don't know how it would've been for a non-knitter. The weather wasn't too terrible, just a bit cloudy. 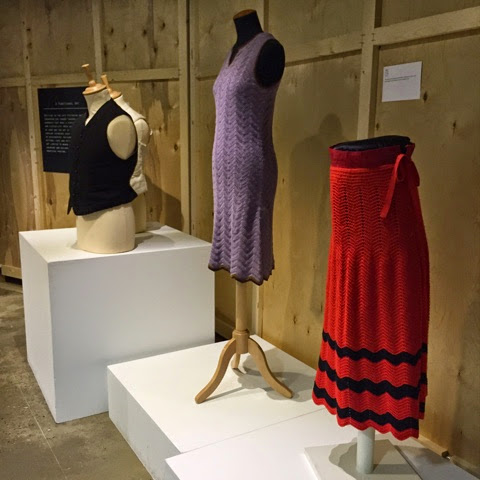 Instead of wandering far, I stayed in the neighborhood near the museum for a coffee and stopped in some of the shops, but didn't buy anything. I walked a couple of miles to the train from there (Bermondsy to Waterloo) and saw some interesting buildings. 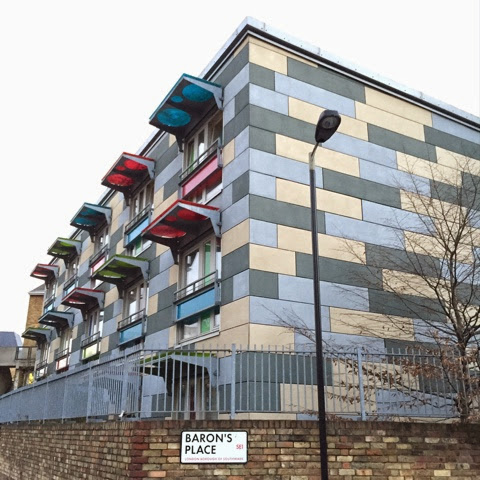 Unlike many other historic European cities, London isn't moribund. New buildings are popping up all over the place. Many are innovative and attractive, making the city vibrant without ruining the historic aspects. It's no Paris--but that's a good thing. 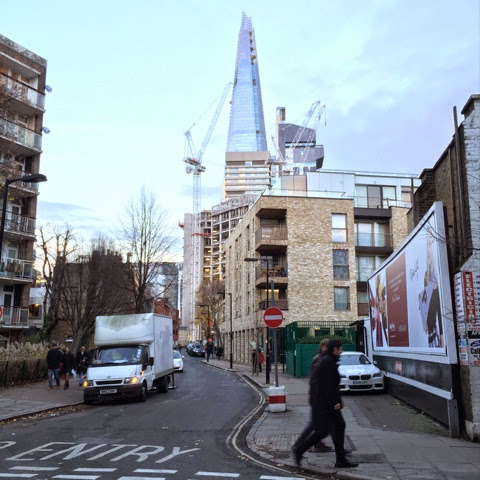 Don't even get me started on Jerusalem. Dad hates it and I agree--everything there looks the same, built out of "Jerusalem stone" and everything is very low. But it is a "holy city" so in something of a different class. Paris has no excuse. In fact, that's one of the reasons I like the 13th--it has a good mix of "ancient" and "modern" buildings. I enjoy the contrast. 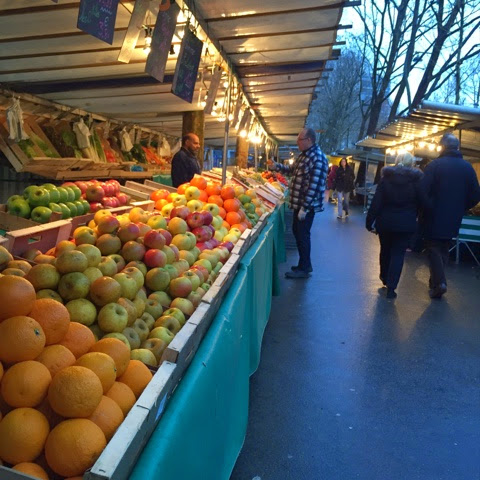 I headed to Paris a few days ago. My visit was too short. I started to get a cold on my last day, so didn't wander as much as I planned. I still walked quite a lot, though. As usual I stayed in my old neighborhood, and was able to go to the local market on Tuesday morning. I also went on a guided "yarn" tour. I didn't mean to buy anything...but I did. 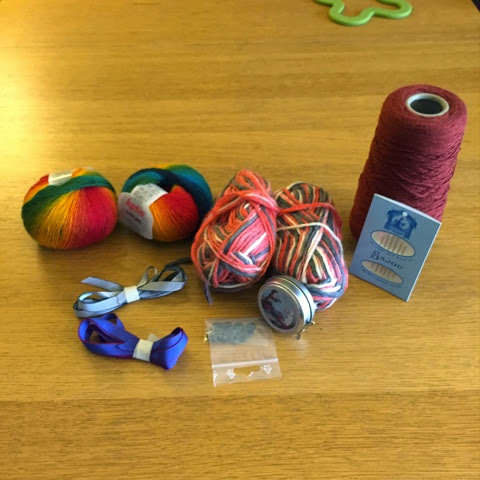 What you see here is some self-striping yarn on the left, mystery yarn in the middle, and a cone on the right. The front row is some ribbon to line a button band, snaps (totally easy to buy in the states!), and a little tin from Sajou with tiny bobbins of thread, and finally some tapestry needles (for weaving yarn ends, was my thought). The tin--hard to see from this pic--has a picture of a dog and cat working together to wind a ball of yarn--I coudn't resist. As usual, I brought a couple of knitting projects with me on this trip--but I also brought some spare yarn and needles to use for knitting lessons if any niece/nephew or great-niece/nephew is interested in a lesson. The mystery yarn is also for the lessons, but I like the colors enough to take it home and use it for something if I don't get any takers for knitting instruction.

I still love Paris and being there makes me happy. How can it be that it feels a bit like a second home? I feel similarly about New York. Here's the view from the balcony of the sweet little apartment I rented:

It was so perfect! I would definitely stay there again.
And now I'm on my way to Israel, which is the motivation for this trip--Dad and Susan were going over Hanukah and I decided to tag along. I knitted three hedgehogs in advance, for the three newest members of what I'm calling the "Israeli next generation." Dad and Susan are already there. I'm a little worried about Susan. She seems periodically confused. She won't let Dad drive in Israel anymore (not a bad call), but seemed to think that we'd discussed me renting a car and, presumably, doing all the driving. The main problem with this is I have zero recollection of the conversation. Secondarily, I also hate driving there. But it may make sense and I'm willing to do it. Still, what is going on with her exactly? Then again, maybe I'm the one losing my mind.
First day, I'll spend with Spesh in Tel Aviv. Then on to Jerusalem either by car or by bus or train. I'll be there for nearly a week, and then spent the last couple of days back in Tel Aviv. I'll be there for Christmas. I have to say, I'm mighty curious to see what Israel will be like at this time of year. I've been there in December before, but not so near to X-mas day (or not that I can recall). Will there be any decorations? Will everything be open on the 25th? I kind of hope so.
Not sure if I'll write again this trip...but it would be good to get some pics up with the hedgehogs and their recipients, woudln't it?
For those of you still with me, thanks for tuning in. Big smile!
Grateful for: the resources to travel.
Posted by Jamy at 5:30 AM