I'm done. I made up my mind! All that's left is to tell the interested parties. Wonder what I decided? Well, let me tell you how I got there. I decided to talk to this guy, Dave, who works at the potential new job. He's been there a long time and I've been working with him on a project for over a year. I've also worked with him in the past. He's a good guy, we like each other, and I can tell he has a kind of paternal feeling for me. He's older than me though I don't think old enough to be my father. I thought I'd be asking him about what it was like to actually work there--what the pace was, how much pressure there would be, and maybe something about the substance. Instead, what I got was reassurance that I should talk to the big boss, the one who made me the offer, and that almost certainly the offer would still be open in six months. Dave really wants me to stay in charge of the project we're working on together (he's a sub, so it's ok for me to have this talk with him. Or maybe it's not--I don't know!). (Aside: I'm still confused about all these different impressions of me: brash and difficult vs. friendly and understanding. Determined and engaged vs. bored and miserable. Perhaps it's all true? At any rate, while I maybe a bad "organization man" I am a good project manager, at least from the perspective of those who I manage.)

So, maybe it's obvious? I've decided to stay for at least the 6 month detail It will be a good test of whether the problem is the job itself (bored/engaged) or just the horrible supervisor (miserable/scared).

I've been saying that my problem is an excess of integrity. It's kind of a brag and kind of a joke and kind of true. Another half joke is that I suffer from being too easy to understand. Not a liability in my current line of work but definitely a problem in academia where being clear seems to mark you as someone who isn't all that bright. Now that's a decision (not pursuing academia) about which I have zero regrets!

Please wish me well as I venture forward with my new situation. Today, I talk to TR and I call the boss of the firm and get the details sorted. In a few weeks, I hope to have TR as a supervisor--I'm already feeling better. The weight is lifting. Hurrah!

Grateful for: a chance.

A pic I took on the walk to work this morning... 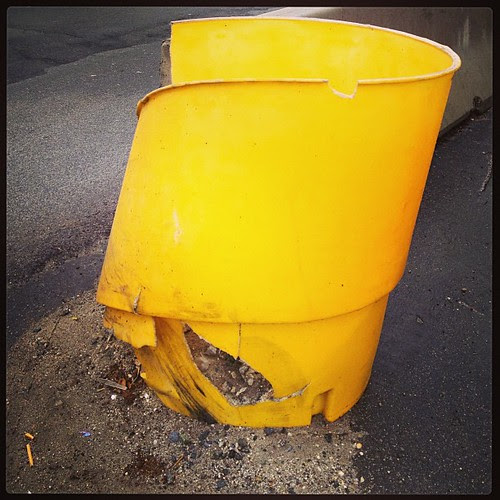