I wrote all of the below a couple of weeks ago...and in the interests of getting something on this here blog, I'm going to publish it un-updated for the time lag...

I am so behind on the blog. I owe you; I owe myself. I could tell you about all those dates last week, but, as usual, there isn't much to tell.

The first date was on a Monday evening. I picked a nice hotel bar that I'd never been to. I was late due to Metro and I also spent a few minutes wandering around aimless in the hotel before I found the bar. Once in the bar, I found my date easily. And, what can I say? He was a decent guy, but I wasn't buying. He wasn't interested in being my boyfriend and I didn't like him enough for that...or anything else. He followed up by text a couple times and I discouraged him, and he stopped.

The next date was Wednesday afternoon. We didn't eat or drink, just took a walk around. Now, this guy, I liked. He was much shyer in person than during our IM or texting interactions. He was pushy in the virtual world, but much milder in person. I was game to see him again.

I also ended things with Bert. I just couldn't take it. I couldn't shake the feeling that there was something wrong with him. It's been over a week and I actually have some mild regret about that situation. We could just be movie buddies and that wouldn't be the worst thing. Or would it annoy me? I don't know.

On Thursday, I had plans to meet another fellow for a beer. This particular young guy (I don't think I mentioned that all of these dates were with guys more than 10 years younger than me) had been pestering me for a date for more than two months. He'd disappear and pop up again. I finally said, ok, let's do it. I offered him Thursday or Friday; he picked Thursday. That particular Thursday turned out to be Valentine's Day, which I didn't realize until later. I checked in with him on the morning of our date and he said we were on, but at 4:30 he emailed and canceled. He asked to reschedule on Friday and I said no.

So, I left my Wednesday date fairly sure that I'd see that guy again, but on Thursday (that very same Valentine's Day), he told me that he couldn't meet me again. He'd been seeing someone else and things had taken a more serious turn...on Wednesday night!...and he didn't feel right making plans with me.

Damn, that was one shitty Valentine's Day.

Since then, I'd say things have evened back out. It's my birthday tomorrow and I have something planned--something small and exactly what I want. I don't like to make a fuss on my birthday and this will be just about right. Even better, I work from home on Wednesday so I can carouse at will. Smile!

The new news is that the only thing making me crazy is work. I'll spare you the details but I think that situation might actually be making me ill. It will get resolved one way or another in the next couple of months. It will end and it will get better. I think dating is more or less on hold in the meantime.

Grateful for: the future.

PS I'm heading to Israel soon to see my family. The pic is of the hedgehogs I'm knitting for my nine great nieces and nephews. 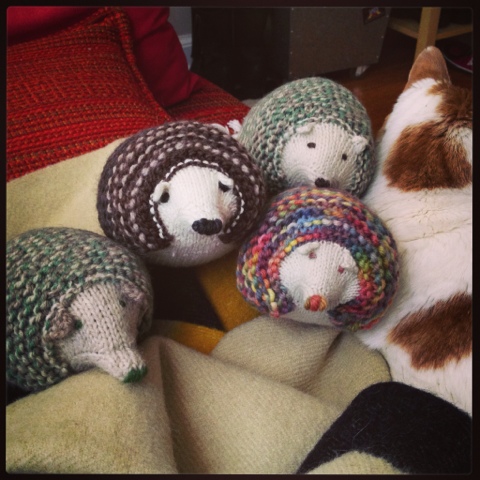