My Sunday-Monday jaunt to New Jersey/New York this weekend was prompted by the offer of free tickets to an off-Broadway show. Why did I get the offer? Because of the blog! I'll put a review up of the show tomorrow but it was almost as much fun to get the free tickets as it was to actually see the show. I immediately knew that I would ask Uncle Marty to come with me. He's a big theater guy and he's taken me to many shows over the years. It was nice to get a chance to pay him back--and it's always good to spend time with him, so a win-win. I ended up leaving early Sunday morning. First stop was New Jersey, to see my eldest brother (B1) and his family. My sister-in-law, nephew and one niece had has for knitted things (as you know). Every thing was all knit up and I was able to give them everything on Sunday. Very convenient for me, since now I don't have to drag the stuff to Israel, where it will be too warm to wear anyway.

A pic of my nephew wearing both his gloves and his sister's scarf: 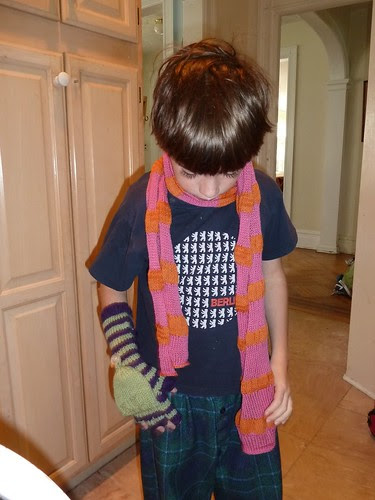 I spent a chaotic and rather unproductive late morning/early afternoon in New Jersey with the family. Then I hopped on a train to Manhattan to see my uncle. I met him at his apartment on the Upper West Side. He offered to order pizza for dinner, which was fine, since we didn't have too much time before the theater. Now, you'd think, it's New York, so the pizza will be something good and special, right? Um, well, Uncle Marty got us each a medium two-topping pizza from Pappa John's. You'll be proud of me for not uttering a peep of amazement.

After that, we went to the show, which was amusing--good, entertaining, but not great. Back at his place after, we stayed up talking for a couple of hours. In the morning, Uncle Marty had tennis, so that left me with a full free day in NY and, even though it was a holiday, everything was open. That meant shopping for things that are hard to come by in DC. Thus, first stop: the Town Shop. I bought a couple of bras after the usual lengthy and frustrating fitting process. Next stop...yarn stores.

Monday was also the last day of the New York City Yarn Crawl. A bunch of different yarn shops were holding raffles and having some special sales over the long weekend. I've visited several of these shops before, having put together my own informal yarn crawl a couple of years ago (at a blog reader's suggestion, actually). I decided to hit up two new stores and one old favorite. I ended up spending more money than I'd planned but I'm pretty happy about my purchases. Well, the first purchase, at Knitty City,  was a total impulse and I have no specific project in mind, but it was a skein of sock yarn of a brand I really like, so it will get used eventually. The shop was small but well stocked--it's also only a few blocks from my uncle's apartment, so I will probably visit again.

The next stop was Purl Soho, probably my favorite yarn store in the city. I ended up buying a book and enough yarn to knit a specific pattern from the book--a jacket. I've wanted to knit a jacket for a while and when I saw the pattern, I knew it was the right one. With the help of one of the clerks, I picked out some suitable yarn, and off I went, with a much heavier bag than I'd started.

The last stop was the elusive Habu Textiles, which I'd tried to visit unsuccessfully when I did my self-guided yarn shop tour.  This time, armed with the knowledge that many NYC yarns stores are not on the ground floor, I actually managed to find the shop (which is on the 8th floor of a building in the wholesale garment district).  It was a fascinating if tiny spot. Habu produces unusual fibers--paper and stainless steel, woven with silk or extra fine merino. I wanted to see this stainless steel fiber in person, though I didn't intend to buy any. However, I did buy some--a kit for a scarf. $25 for two spools of fiber and a pattern. One spool is extra-fine merino, the other a silk-steel blend. It's wonderful stuff and, while it is yarn, the diameter is more like a medium weight sewing thread, so it takes a little concentration to knit. But so interesting and so much fun! I don't regret the purchase at all.

A very short but sweet trip to New York. I'm back to work and not loving it but quite busy, which is good. I'm getting nervous about my big trip, which commences in just two weeks! More about that soon, I'm sure.