This weekend--Saturday to Sunday--Pele and I took a short camping trip to the beach. It's been at least two years (longer?) since we last went camping. We took no pictures of each other (too bad, actually), but maybe she didn't want them given her pregnant state? At any rate, I was a very last minute packer and didn't bring my camera, only the iphone.

But I did take a few pictures--of a turtle. 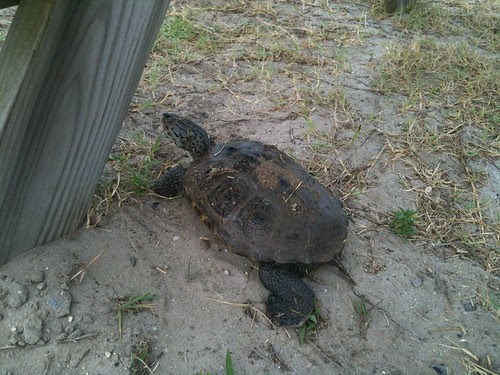 On the drive to the campground, we passed several signs warning us to watch out for turtles. I told Pele I really wanted to see one of these turtles. How big were they? Were they large enough to be seen in time to stop while cruising along at 45mph? 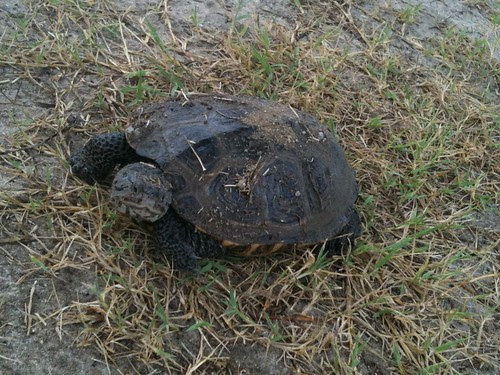 Short answer: no. This isn't the tiniest turtle in the world but I doubt I would have seen her in time to stop.

Now, how do I know it's a female turtle? Because about half an hour after first spotting her her and watching her scoot all around our campsite and make several test digs... 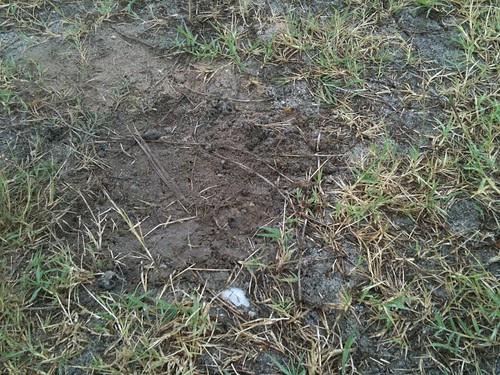 I watched her lay about a dozen eggs and bury them right at this spot. I didn't have the phone by me when I caught her a-laying, but I watched the whole thing. Pele was coming back from the bathhouse and I gestured wildly to get her attention--she came over and saw the second half of the egg laying and the methodical burying process.

Yep, around the end of August, a whole passel of baby turtles will emerge (hopefully) from this spot.

Interesting. That's about the same time Pele's little egg is due to emerge. Heh.

We had a good time, despite wind on Saturday, rain on Sunday morning, cooking fussy-ness on my part and exhausted driving home on Sunday. That's just how we roll!

Grateful for: putting the van to good use.
Posted by Jamy at 6:26 PM