While the vast majority of my time is spent basically doing nothing, it's not like I can actually spend all my time doing nothing. (Even my nothing usually means knitting, watching a movie (usually at the same time--I have two nearly complete socks that I just started on after getting back from my travels), reading blogs, reading other things, writing a little tiny bit, chatting online, washing dishes, etc.).

I am trying to make sure I take full advantage of Paris while I have the chance. I have heaps of museums left to visit but I'm a little more interested in gastronomical wonders and window-shopping. Oh, and my continued quest to be sociable.

To that end, let's see what I've been up to.

Thursday. I went to a gathering for the release of the Beaujolais Nouveau. I had to trek rather far a field to get to the meeting place in the second. It was a little out of the way bar/restaurant. It took me about half an hour to get there. I talked to a couple of people and had a tiny sip of some terrible wine (worse than the one euro stuff Kent bought on a whim).

Friday. I was lucky to catch Kent online and we had a long virtual chat in the morning. In the afternoon I trekked to a very exclusive candy store I'd read about (Denise Acabo) and got some treats. After, I went to take a look at the Galeries Lafayette. It's quite a fancy department store and actually a tourist destination--Asian folks were arriving by the busload! I couldn't imagine actually shopping there since stores of that size overwhelm me and make it impossible to decide on anything but I did enjoy the pretty, pretty lights and window displays. Afterwards, I walked to a nearby theater and went to the movies, "Body of Lies." Enjoyable enough but nothing special.

Saturday. I stayed home feeling tired most of the day. In the evening, I got myself moving and I went out to watch the All Blacks (NZ national team) whomp Wales. (Rugby, I'm talking about rugby. Blame Kent.) I only saw the second half, which means that I missed the haka (war dance, no joke) the All Blacks do to start the game. I understood almost everything going on to large amount of time spent talking about rugby with Kent.

After, I stopped for dinner at little Japanese place. Overheard English being spoken nearby and joined in the conversation and then was invited to sit with them. Nice folks. They invited me to go out with them but I was tired I had to say no. (Sitting around all day tires me out, apparently.) Two of the women, sisters, gave me a lift to the metro and we exchanged numbers.

It occurred to me that people don't really talk to you in bars in Paris. At the pub-style place where I watched the game, English speakers abounded and no one even said hello. In fact, the service was so non-existent that I didn't even order a drink. Made for an economical evening at least. Yet, at the restaurant, squeezed so close to the semi-English speaking group, it seemed natural to say something and they right away were friendly and receptive. Maybe this is just my experience but I wonder if restaurants are more likely to be meeting places in Paris that bars.

Sunday. I ventured out in the early afternoon for a sandwich but it was very cold and wet so I didn't take a longer walk. In the evening, I had dinner with landlords, their little daughter (adorable) and another friend of theirs from out of town. I really like them and we would be friends by now under other circumstances. Well, who's to say we're not friends? They even cut me a deal on the last month's rent--agreeing to apply the month's deposit I gave them towards the rent and accepting a smaller deposit for the last month instead. Because I've been such a good tenant--but it was easy, since they're very good landlords. I'll miss them!

Monday. I took a very long walk and, on my quest to see more of the commercial side of Paris I went to both BHV and Le Bon Marche. I've been to BHV before and been within spitting distance of the Le Bon Marche without realizing it.

I ate a late lunch at the BHV cafe: 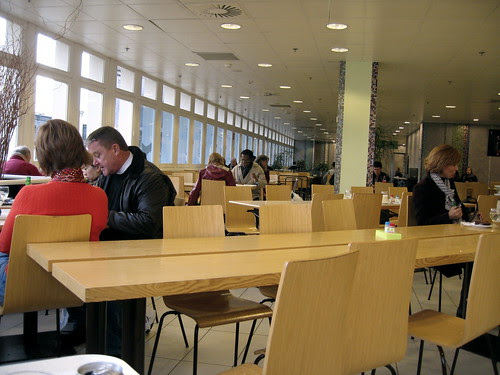 And enjoyed the amazing view:

Again, I didn't buy much--picked up a couple of presents and some food--but I was impressed with the size and bustle of both places (neither had the impressive window displays of the Galeries Lafayette or Printemps). I walked between the two stores and got caught in the rain with no umbrella, but I stayed warm enough thanks to my recently completed hat.

On the walk, I stopped in Deyrolle's, a famous taxidermy shop that JenA told me about. Crazy. Of course, I didn't buy anything but they had a lot of little things on offer, like pinned butterflies, moths and beetles. Yikes. Interesting, to say the least. 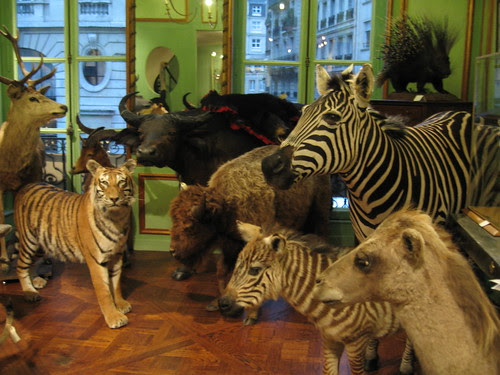 I actually bought myself a nice looking steak at Le Grande Epicere (right next to Le Bon Marche) but was too tired to cook when I got home. I ate it the next night instead.

Tuesday. A quiet day because I was all walked out from Monday. I went to the movies (an oldie this time) in the afternoon, stopped for coffee (decaf because I drank too much coffee on Monday and didn't sleep well) and a cookie (not very Parisian, but oh well). I walked a little way towards home but in the end took the metro. I cooked myself a good dinner and was able to fall asleep before 1am and even sleep straight through the night. I don't know why my sleep has been so off recently but I seem to be settling out a little.

Wednesday (aka Today). I realized after talking to my landlords on Sunday that the carte de sejour (residency card) that I lost was really my permanent card. The "temporaire" meant that I had temporary residency, not that the card itself was temporary. Ach. To that end, I called yesterday and made an appointment to come in and get a new card. That was an interesting conversation since it was all in French but I managed, barely, to make myself understood, though they weren't pleased that I didn't have a photocopy of the card, the number of the card or a police report. They still gave me an appointment time.

Today, because I'll need it for my appointment, I went by my local police prefecture and filled out a little form saying I'd lost the card. After I filled out the form, the lady made a copy and gave me the original. She started talking about the American Embassy. I got very confused because I couldn't see what on earth the American Embassy had to do with anything. In the end, her co-worker chimed in and I tried to explain I already had an appointment with the appropriate French office to get the new card. Well, who knows what I'm really supposed to do. I just hope that I can get back into the country when I return from England next week!

Now, I have to do some laundry and go meet the English-speaking (hooray!) knitting group later on this evening.

Grateful for: exploration.
Posted by Jamy at 10:27 AM