Yesterday, I tired myself out by biking all over the city. Yet, did I actually do anything? You be the judge.

I started out late after eating a hearty breakfast and taking a bath. First stop: yarn store. I had a notion that I wanted to make a sweater. I found a couple of patterns that seemed within my skill-set and a very rough estimate of the amount of yarn I would need. I knew there was a sale at this store so I figured I'd get something cheap and hope for the best.

I biked to the store, which is at Place Monge. The selection was sparse and almost everything had high acrylic content. I don't want an acrylic sweater. I was discouraged and decided to drop the sweater idea. I also had a notion to knit some washcloths so I got two small skeins of cotton yarn for that--I managed to choose a variety not on sale. Good job!

Next stop: WH Smith bookshop on rue de Rivoli. This was a much longer bike ride but mostly downhill, so no problem. About three-quarters of the way there, I noticed my front tire was almost flat. At the next Velib station, I pulled in and changed bikes. While there, I offered assistance to a man and his young son who were trying to buy tickets for the first time. I helped in French, but as I was leaving with my new bike, I saw he was still struggling with the machine, so I checked in with him again. This time, I slipped into English, and he answered in English, even though he was obviously French. Funny. The machine kept rejecting his credit card and he concluded that the machine was broken. I smiled sympathetically and was on my way.

I found the bookstore with no problem but the nearest Velib stand--directly across the street--was full! I biked to the next nearest one (after consulting the map I have that lists all the stations) and had to wait for someone to check a bike out before I could check mine in. Beware the center.

I walked the couple of blocks back to the bookstore and found it PACKED. I was there because they'd advertised a great sale. But, the sale books were confined to one tiny little table--and anything worth buying was long gone. Since I was there, I picked up a couple of new books and another, better, book-style map of Paris. I spent way too much money considering what I purchased. Oh well.

It was after 3pm and I was starving. I wondered how close I was to the area I've been to a few times with all the Japanese restaurants. I headed in the general direction (further North) and, without too much trouble, I found what I was looking for: a noodle restaurant. Yum. Not a fantastic bargain, but it was good. I'll be back for sure (the noodle shops are in the 2nd, near the Opera).

Next, I felt very tired and not exactly up for more biking--you need to be alert for this activity in Paris. Instead, I walked to my next destination: a movie in the Latin Quarter. I walked through mobs of tourists on the banks of the Seine. I was still hungry, so I stopped for a 2-euro crepe with sugar. The lady made it for me on the spot--it's pretty fun to watch the process. I walked another block, crepe in hand, to the Pont Neuf, sat on a stone bench near a few other tourists, and ate my crepe. I continued my walk and got to the theater in plenty of time for the film, Written on the Wind. A wonderful, overblown melodrama directed by Douglas Sirk. Melodrama is probably my least favorite genre but I enjoyed this film.

Completely worn out, I took the bus home. I thought about stopping for more food but decided I could make do with what I had at home. I did and it was fine. I did not go to sleep hungry.

Around 11pm, my dad called me. He gingerly asked about the work situation and was full of unsolicited advice to call Larry and tell him I wanted the job. I did not want to talk to Dad about it. I'm usually happy to go over work stuff with him, but I wasn't in the mood. That is all he had on his mind, though, and when I tried to tell some funny stories, he cut me off (unintentionally?) and steered conversation in other directions (though, luckily not back to work). Dad seemed to think it would be fine to call Larry and talk this over with him. I'm not sure it's appropriate. What do you think?

I know I promised you some photos. I have to say, I'm so not into it! Still, a promise is a promise, so here are a few select pics (a link to the full flickr set will follow): 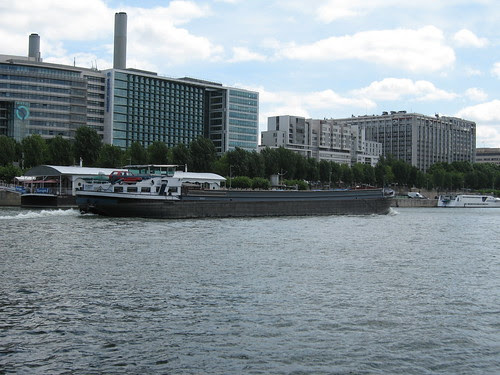 View as we left the dock. I like how the barge has a car on board. 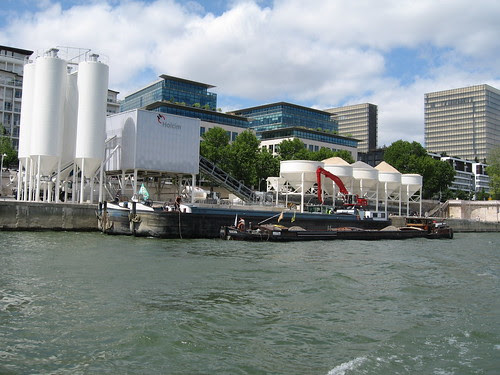 Industry along the Seine. There was at least one other container/storage place like this. I wonder what they're holding? 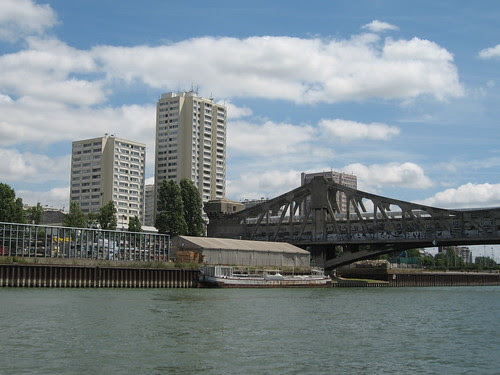 Aqueduct with towers in the background. 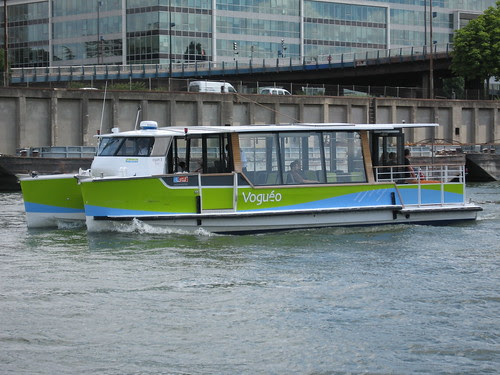 Our boat looked the same. We passed a few others on the trip. 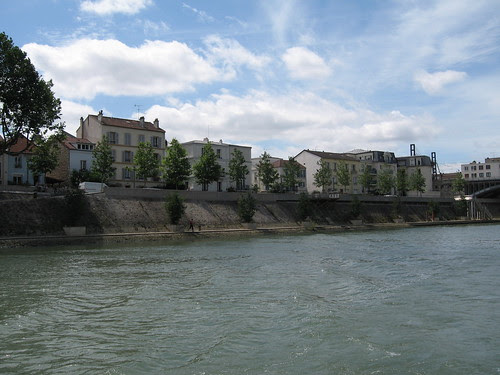 On the Marne it started to get pretty again. 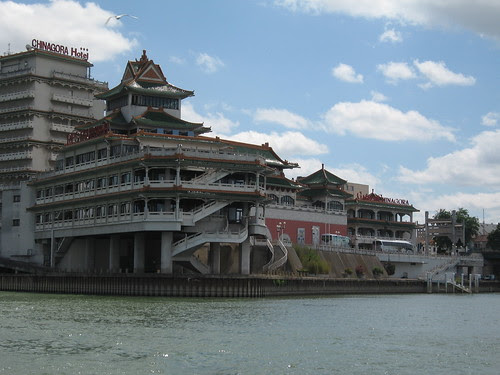 This fantastical place perched right near where the Seine and the Marne rivers meet.

Here's the link to the full set if you're interested!

I may try and take a photo a day. I like the idea of photo essays but I'm not interested in all the work it takes to make them happen (please don't remind me that I have nothing better to do). But one photo a day? Maybe. I'd have to start carrying the camera with me...hmm...maybe one photo a week is more like it. We'll see.

Grateful for: the stories.
Posted by Jamy at 6:42 AM