The rest of the series may be found here:
Part One
Part Three
Part Four

Day five: 9/27, Monument Valley to Durango, CO. 196 miles.
First thing in the morning, after breakfast of oatmeal and coffee, I go to meet a tour guide for bumpy drive through Monument Valley. It's me and two women in their 50's (?) who are there to do hearing tests on the kids in the local schools. They are pleasant touring companions and one even takes a good picture of me at John Ford's point:

It is possible to drive one's own vehicle through part of Monument Valley, but even the public road is bumpy and not suitable for all vehicles. I don't even consider taking the camper. If you pay for a tour, then you get to go off the main road and see other parts of the Valley. Since I've been dreaming about visiting this place since I saw my first John Ford western, I don't hesitate to take a tour. I feel slightly guilty that my main excitement about being in this place is because of the movies. But what can you do? 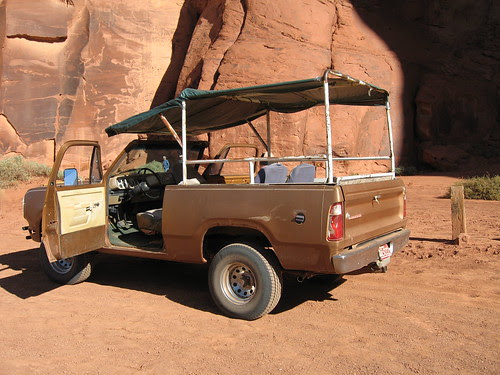 As I recalled from the one other time I visited the Navajo Reservation, stands selling jewelry are everywhere: 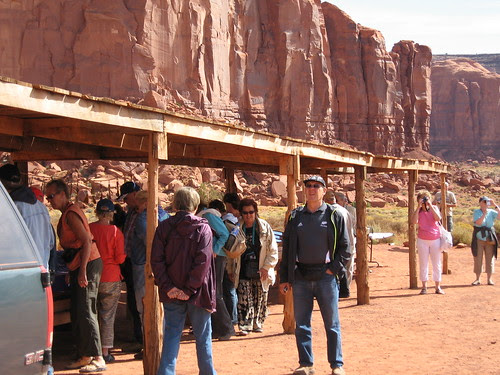 At our first stop (not pictured), I buy a long beaded necklace with a little carved black turtle pendent (a fetish). The lady tells me that the turtle symbolizes patience and self-sufficiency. I decide I'm like a turtle, driving around in my modern-day covered wagon. Instead of wearing the necklace, I hang it on my rearview mirror as a totem. It's still there. 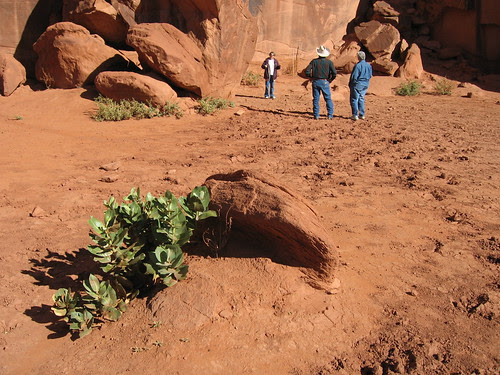 A famous view, "The Window": 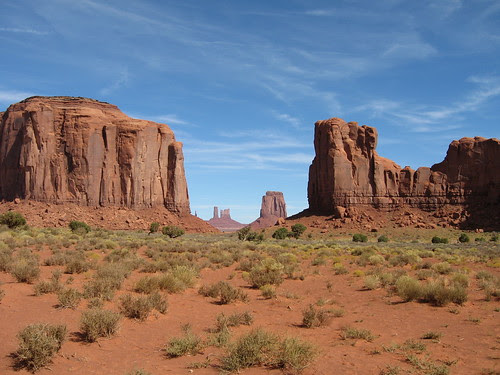 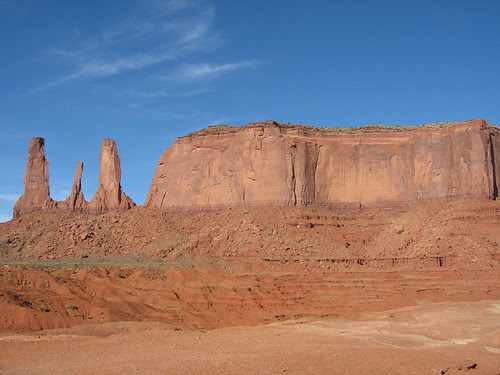 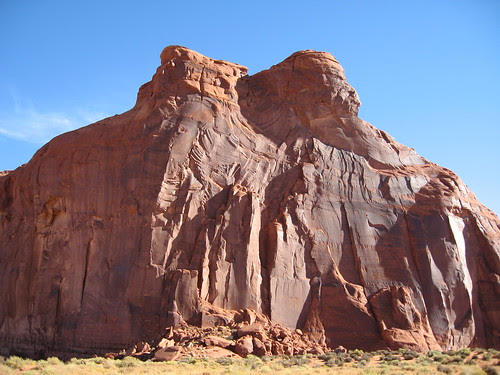 I am so, so happy I went to Monument Valley. It's the bit of the Southwest I'd been hoping to see on every other trip I made to that part of the country.

After the tour, I get on the road, determined to make it at least until Durango, CO. At one pit stop, where I also buy an ice cream bar snack, an older man talks to me. He asks, "How far is it to Warshington?"

I'm puzzled and wonder, "How does he know I'm going to Washington?" I don't say anything and just look at him and smile.

He says, "I saw your license plate."

"Eh, I'm a slow driver too. I need to go to Warshington."

"It's beautiful up there."

Next stop is Durango. I "check in" to an RV camp. The proprietor only charges me $20, which is $15 less than the regular price, as she puts it, my "rig is so small." I go into town, buy a couple of things: a thermal mug for coffee, a small plastic container (must decant! it's a mania), and an extension cord for the 12v outlet at Radio Shack. (I plug a variety of things into this outlet to charge them during the drive but my adaptor keeps falling out. The extension cords solves the problem.)

Durango is the fanciest little mountain town you'll ever want to see with loads of touristy clothing and gift shops. It's main claim to fame is a narrow gauge steam railroad. I don't ride the train but its whistle is heard all night throughout the town.

He says, "You look like a local. And you look competent."

We walk along in the same direction and I spot the place they're looking for and point it out too them. Guess they asked the right person after all.

At the campground, I settle in. My neighbor to the right comes over to ask me about the camper. He's a man, seemingly alone, in a little pick-up truck with a camp top. We talk for a while. He asks me about the camper. I point out all its features: the two burner propane stove (propane tank is under the van), the sink (a water tank is under the van), the double bed "downstairs" and the pop-top with another bed "upstairs," the fact that it plugs in (charge everything!), and the little fridge that doesn't work (or does it?). I go on and on about other things too. Later, I realize that I didn't ask him where he's going or anything about him. Sigh. I realize that I miss talking to people.

Grateful for: random conversations.
Posted by Jamy at 12:31 PM