The rest of the series may be found here:
Part One
Part Two
Part Four

As I come over the Raton Pass from Colorado to New Mexico, I listen to local radio and hear an announcement that the Raton Tigers will play football in Clayton, NM that evening at 7pm. I was hoping to make it past Clayton, to make up for lost time, but decide that if I'm tired when I get there, I'll stop in Clayton and go to the game.

I go to the High School football game, inspired by my favorite tv show, "Friday Night Lights." The Clayton Yellow Jackets (colors: orange and black) are playing the Raton Tigers (colors: yellow and black). To my surprise it costs $5 to get into the game! Guess that's what happens when it's the main entertainment in town. 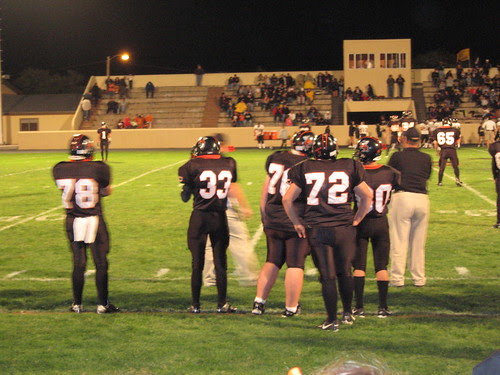 I sit near a family, the two sons (8 and 5?) are next to me, their parents are in the row in front of us. The younger boy has no qualms about clambering over me to fetch refreshments ($1 for hot dogs, popcorn, soda). No one seems to notice the stranger in their midst. I cheer for the home team when appropriate. The crowd is full of families, old folks and teenagers. Everyone wears ribbons with the team colors or black and silver. Some ribbons are attached with garters to the legs of boys and girls. 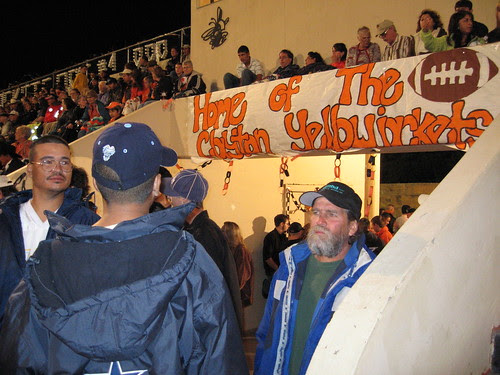 The Jackets are getting stomped. Halfway through the first quarter there is 30 minute rain delay and I retreat to the camper. I go back to the game and at halftime, the Homecoming king and queen are crowned. Each nominee is escorted across the field at the 50 yard line, by two adults (usually, but not necessarily, the parents). The game announcer reads a list of each kid's accomplishments. One of the boys is a football player and he wins. As soon as that happens, I guess that the girl in the blue gown will be the homecoming queen, and she is. How did I know? She is the cheerleader. I wasn't sure if it was just a popularity contest, but as soon as I knew it was, well, then it was easy to tell who would win. 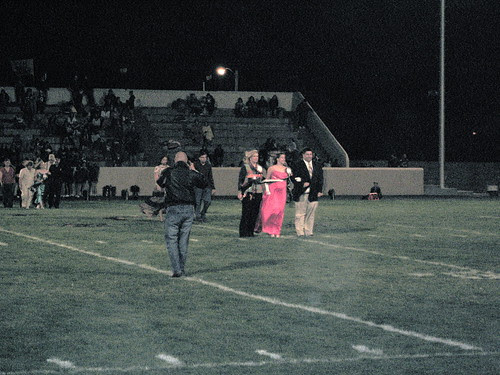 After the homecoming ceremony is over, marshal music starts playing and the announcer comes over the loudspeaker again, "Well, now we were supposed to have the fireworks, but they're cancelled due to high winds. You can imagine them, though."

With that, I decide to wrap it up and I drive the camper five blocks back to the campground. I settle in with a movie (via computer) and pray the camper is not blown over.

The driving today is rough due to high winds. The van does not like mountain passes, but the consequence of driving over them is going slowly. Gusty winds of 20-30 mph mean being blown all over the road and tense shoulders from hanging tightly to the wheel. Not fun.

Because of van-enforced slowness, I did a lot of my driving today off the freeway. It's much preferred, but the wind, oy, the wind! Hopefully, it will be better tomorrow.

Part of my off-freeway driving took me to parts of historic Route 66 where I happened about the Sayre, OK "Hoot & Scoot." 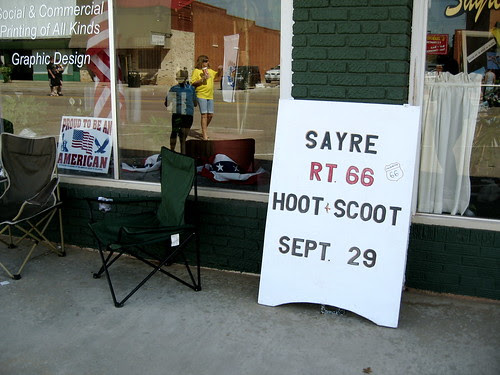 Part of the festivities included classic cars. And there it was, my dream car: 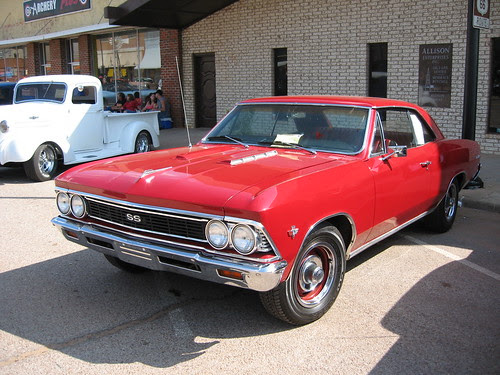 Ok, I guess my real dream car was the convertible Malibu with the white top and red body, but this pretty SS is damn close. 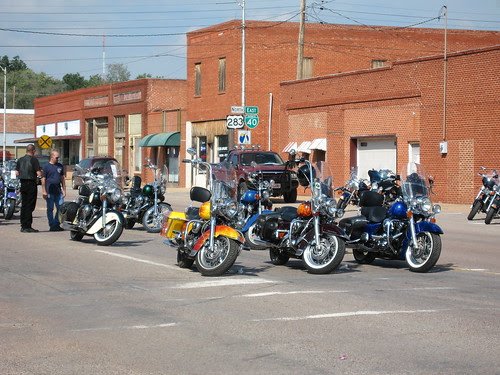 After three nights in the camper, I decide to stay in a motel. It feels like heaven due to cable and a bathroom. Ah, the HUGE things. Later, I go to do some laundry and consider driving into town. I don't make it and go to a fast food place between the laundry and the motel called Braums. If you're ever in Oklahoma, "parts of Texas," Kansas, Arkansas or Missouri, go. By far the best fast food I've ever had. I get a "junior" meal, which comes with a 12oz milkshake, a few fries and chicken fingers. Best milkshake ever! And the chicken was actual pieces of chicken, not "nuggets." (It was so good, I go back for breakfast the next day.)

Grateful for: being able to stay in motel if I need to and Braums.
Posted by Jamy at 4:28 PM