The rest of the series may be found here:
Part Two
Part Three
Part Four

Funny thing about me, right after I come back from a long trip, I don't like to talk about it. Especially if it was in anyway annoying, engaging or frustrating. My drive across the country in September/October was all of those things. I think I'm finally ready to edit and post what I wrote at the time, plus flesh out bits of the story.

UPDATE: Obviously, I need to provide some context. In September, I went to Seattle to claim a 1989 VW Camper (Vanagon/Westfalia) that belonged to my mother. She gave/sold it to me (I paid her the price of the repairs she made over the last year or so, much less than the actual value of the vehicle). Mom and I negotiated this exchange for a couple of years and I finally decided, enough!, it was time to get the camper.

I haven't owned a car since moving to DC eight years ago, so it was with some ambivalence I took possession of the camper. Mom also seemed to have some hidden agenda at work and I'm pretty sure there are many strings attached to this "gift." I'm sure I'll discover those soon.

Before leaving for Seattle, I'd plotted a drive that would take me from Seattle to Washington DC via Arkansas. Why Arkansas? I've been to every state in the county except: Alaska, Hawaii, Mississippi, Alabama and Arkansas. Arkansas was the one new state I could reasonably make on this trip. I allotted ten days for the drive and that's about how long it took. I made one unscheduled detour, which added a day of driving, but it was worth it.

The first three and half days of the drive were done with my mother and her dog. The dog was an excellent traveler. I wish I could say the same for the humans. On the third day, Mom picked up a rental car in Salt Lake City and we continued as a caravan for the rest of that day. On the morning of the fourth day, Mom headed back to Seattle via Bryce and I continued south to Monument Valley, my unscheduled detour. The rest of the trip remained as planned.

Part one of I'm not sure how many parts follows:

Day one: 9/23, Seattle to Oregon.
Camp in a tiny state park campground. Don't make it to Idaho as planned. I blame Mom's very slow getting ready process. Fasting the day before didn't help either. Another Vanagon parks one spot over from us, making three campers total. Mom asks (in her sly, teasing way) the other Vanagon camper if she thinks it's a coincidence that there are two VWs at the campground. The woman says, "Oh, I don't know them." Sigh. At least I laugh when Mom tells me about it.

Me and the camper in Oregon: 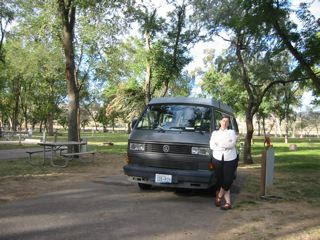 Day two: 9/24, Oregon to Idaho.
We make it to Idaho, though it's slow going. No time to stop in Boise, but we do drive through town and take a look. While I'd hoped we camp at Antelope Island, in the Salt lake (and so did Mom), we don't have the stamina to make it that far.

Instead we stop at Crystal Springs, an hour north of Salt Lake City. $15 for no hook ups OR water (which they didn't mention). Another $5/each gets us into the pools fed by the spring water. We take a soak after cooking dinner in the camper.

Day three: 9/25, Idaho to Utah, Capitol Reef National Park.
Big argument about I'm not sure what in the morning. Mom says the dog is afraid of me because I'm so angry. Hilarious, because the dog is following me around! Whatever. I'm growing more disgruntled by Mom's poor van-housekeeping. Oh, right, she screamed at me the day before about the folding seat in the back and how I broke it. Forgetting that it's now MY van and not her problem if it is broken. Not the easiest transition ever.

We drive to Salt Lake, get breakfast. Walk around the Temple Square area a little and pick up Mom's rental car. Whew. Things are much easier from here out.

Once we're off the freeway the drive is gorgeous.

We continue driving to Capitol Reef National Park. The dog stays with me as does most of the stuff. As we get closer, I decide that we should stay in a motel. I pull into one a few miles from the park and the first thing Mom says is, "I don't like this kind of gas." I explain that I'm not getting gas, that I think we should stay in the motel. She reluctantly agrees but by the next day grants that it's a great idea.

As it turns out, the Capitol Reef campground is full! What luck that we didn't try to stay there.

A glimpse of Capitol Reef: 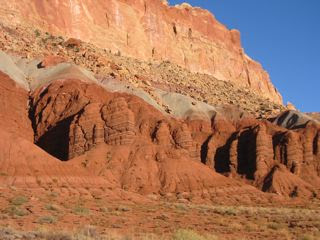 We do a bit of the breathtaking scenic drive. Then a fancy dinner at the Rim Rock Inn. The food is delicious and the place is full of Europeans. The waitress correctly identifies the dog as a labradoodle. We split a full dinner and dessert and are quite full.

Day four: 9/26, Cap Reef to Monument Valley.
This is my last day with Mom. We drive to the nearest look out point and take a 600 ft hike to see goosenecks. Totally worth it. I go my way and Mom goes hers.

I get directions (or confirm them) from the Ranger to Monument Valley. The day before, I decided to go, even though it will cost me another day of driving.

On my own, I take part of a very short hike in Cap Reef. Then I drive through. I almost run out of gas and temporarily loose my brakes before driving down three miles of dirt road switchbacks. Brakes come back and I make it.

I spend the night in a no-frills campground in Monument Valley. I can look out of the van window and see the moon rise. It's unbelievable. My aunt calls to see if I'll be in DC next weekend. She is pleasantly taken aback when I tell her where I am. (It's one of the few spots where I'll get cell-phone reception for days.) 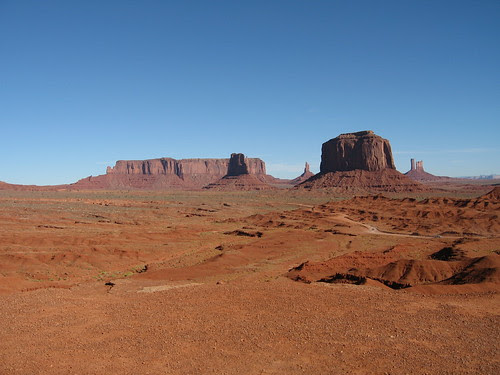 Grateful for: driving.
Posted by Jamy at 6:46 PM