The rest of the series may be found here:
Part One
Part Two
Part Three

A long day and a good one. Sure, my knee ached and I was tired. But I stopped as much as I needed and got where I wanted to go. Tomorrow, Nashville, and interaction with real live friends!

I stop for breakfast at Braum's and have a brief conversation about the high winds with a rancher. He's going out to check on the cows, who aren't happy. I'm driving across the plains in a narrow, tall vehicle. I say, "I'd be hunkered down too if I could!" He laughs.

After a not very memorable drive, following the AAA guide, I pull into Burns Park in North Little Rock. It's a regular city park, but tucked among the picnic areas and basketball courts is a nice, woodsy RV Park/campground. It's $14 for electric and access to the bath house and that's good enough for me. One thing I've learned is that I want to be as close as possible to the bath house. Running around strange campgrounds at night is no fun. I pick my spot then I drive off for gas and an adventure.

I haven't decided what to do about dinner. I had a big lunch (Mexican, again, my search for BBQ was fruitless) and I'm not hungry. But what I really want to do is find the movies.

I reach Little Rock proper, which is only a few miles away. I find gas and I drive through downtown, then south of downtown and make a big loop around the city. Mom calls and we talk while I drive. She is impressed with my driving progress. We get off the phone and I've given up on the movies. And then, it happens, I find a theater and I hear myself say, "Well, blow me down." I'm a few minutes late for "The Brave One" (only so-so) but it doesn't matter. (This decides the dinner question: milkduds it is. I never do find BBQ in Arkansas.)

I think about asking for directions back to the freeway but decide not to. I follow the same road, continuing my loop, and find my way right back to where I need to be. I laugh and think, "I can't even get lost if I want to!" Please note: I did not want to get lost.

Back at the campground, I'm ensconced in the camper with the screens on and all the windows open. This place is full of mosquitoes, but the camper can handle it. It's going to be a warm/cool perfect night. I hear the crickets and that's it. The other campers, mostly in RVs, but at least one tent, are completely silent. I hear a plane landing nearby. I'll keep the radio quiet (not the real radio, podcasts) so as not to disturb the neighbors.

In the middle of the night, I hear a small creature climb a tree next to the camper. I close the back hatch. I think it's a possum.

I am bound and determined to get some BBQ today and with that in mind, I stop in Jackson, TN. I am almost stymied again, but on my way back to the freeway, I spot this little place: 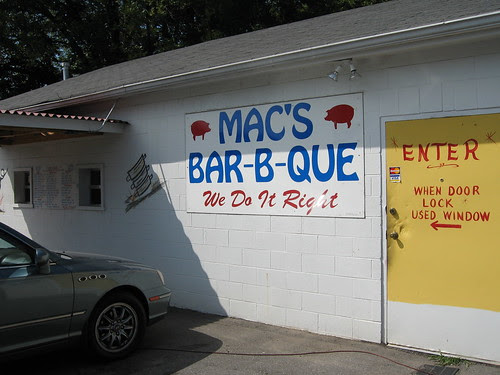 It looks authentic so I pull in. Turns out the owner is from Chicago. The sweet tea is terrible but the ribs and fries (!) are edible. Since I'm the only customer, the owner keeps me company while I eat.

I make it to Nashville around five in the afternoon. KJ isn't home when I get there but Steve is. We hang out and he gives me a much needed beer. When KJ gets home, I give them a "tour" of the camper and they are duly impressed.

I mention I crave BBQ but since I had some that afternoon, they take me to Mexican with some friends. It's a good group but I pass the evening in something of a daze, since I drank more than I had in a week. It was fun.

I sleep extremely well in a real bed.

In the morning, someone (KJ or Steve? I can't recall) has made breakfast. And coffee. I am very happy.

Then, I'm back on the road.

The best thing about this day is that I go through Knoxville, one of my old hometowns. I always say I'm from Seattle, but before Seattle, I lived in Knoxville for about six years. I attended kindergarten through fifth grade there. I like Knoxville and there is one thing about it that I know with certainty: where to get good BBQ. If you are ever there, you have to go to Buddy's. Here is what I ate: 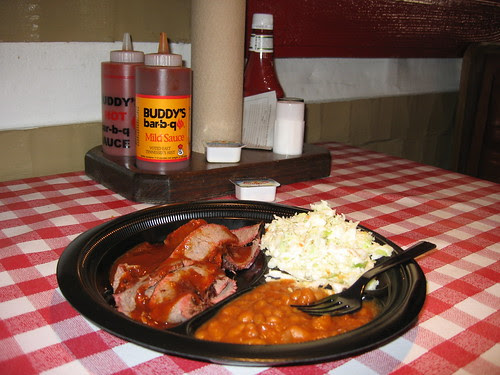 This is the beef plate. The pork is probably better. You'll also notice that the most excellent hush puppies are already gone. And the sweet tea? Perfect! Makes up for the atrocious stuff from the day before.

I drive right through Knoxville, on Kingston Pike, starting on the outskirts of town, near my first neighborhood, West Hills. Then through the University area where it turns into Cumberland Ave., near my second neighborhood, Fort Sanders. Then right through old downtown where I pick up the freeway again.

As night starts to fall, I pick a random place to stop. It's an un-pretty RV park. RVs are interspersed with small houses. The old man clerk isn't pleasant, but for $19.95 he sells me the right to park in an inconvenient spot (too far from the restroom!). It's fine. Tomorrow I'll be home

I stop in Staunton, VA for an overpriced lunch in the old railway station. At least the surroundings are pretty. As I get back into the camper, a man says hello. He tells me he did his medical residency years ago near Seattle. He's wearing a UNC cap, so I mention that I went to grad school at Carolina. We smile broadly at each other before I pull myself into the driver's seat and start on the last leg of my trip.

Less than a mile from home, this greets me: It blocks my most direct route home, but doesn't slow me down much. I am so happy to be home.