What exciting things have happened upon my return to DC? None! I "gorged" on illegally downloaded episodes of The Sopranos last night. The Sopranos is kind of like pizza—even when it's bad, it's still much better than everything else out there. Yum, Sopranos.

Anyway, that leaves me with time to tell a few more stories about my trip in NY. As usual, I had the pleasure of sharing a room with JenA, who is now a Baltimore resident (yay!). Gives me one less reason to visit Chapel Hill, but one more reason to visit Baltimore. I'm happy because I will see her more than once a year now.

My first evening in NY was conference-free. As planned, I stopped by the Town Shop on my way to Uncle Marty's. In case you didn't catch my veiled references, the Town Shop is a lingerie store. It's one of those places where a lady comes in with you and, ahem, sizes you up. I know what size I wear and was wearing it when I arrived. The lady came into the fitting room with me and watched me take off my shirt, then asked for the size of my current bra. She also asked what style I wanted and came back a few minutes later with about a dozen items for me to try. I rejected one immediately because I already own it and it's not comfortable. I tried on four more and each fit perfectly. I bought all four. The current lack-of-comfortable-bra crisis has now ended. (Wow, way more than I ever planned to write about bra shopping, which is torturous, hideously expensive and perpetual—bras wear out rather faster than other clothing items because of the non-durable nature of elastic.)

After the love-fest at the Town Shop, I stopped by Talbot's and picked up a skirt that fits perfectly and I currently love. I wore this skirt two days in New York and I'm wearing it now. It's still miraculously cat-hair free.

Uncle Marty cooked me dinner and gave me gin and tonic. We stayed in and talked until I started yawning uncontrollably around 10pm. I went to sleep and awoke to scrambled eggs and a bagel. I certainly ate well in NY! I was late getting to the conference and missed part of a meeting but oh well. Uncle Marty is well worth it. I probably should have tried to spend more time with him.

Saturday evening, I had dinner with Karen and "Animal" (do you have another pseudonym?) from Iowa. We trekked down to Chinatown and I guided us to a restaurant, New Malaysia, that Joe recommended long ago. It was excellent but the adventure was almost as much fun as the food. Over dinner, the Animal asked, "How long did you live in New York?" I smiled and said, "Two years." He never would have questioned me because most people think, correctly, that I am from New York and I can get around Manhattan easily. But, I couldn't stand it so I added, "From ages zero to two." The rest of the weekend I amused myself by telling people I'd lived in New York for two years. Really, though, when people ask me for directions, which happened twice on this trip, I can give them confidently. Maybe it's bred in the bone.

I got up semi-early on Sunday, and as I wandered I saw groups of cops milling around everywhere. 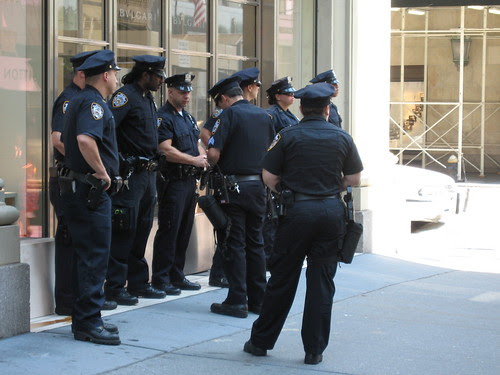 Turned out, they were there to patrol the Dominican Parade, which went right down 6th Avenue, in front of my hotel later that afternoon. 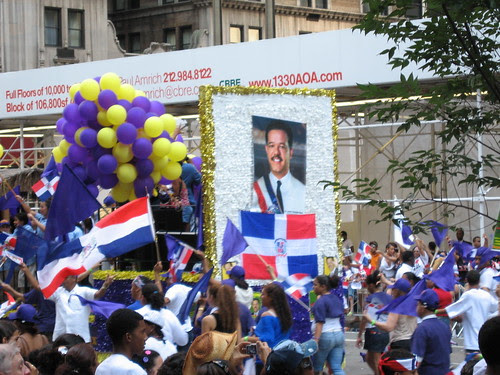 That night, a group of us went for Chinese food. I sat next to Katie, who'd come up with C-money, to see her brother (Animal) and Karen. Katie declared, during a discussion of her sightseeing that day, that "New York is boring." I was so astonished I didn't say anything for fear of getting upset. Later, I told others of her statement and said, "Name me one thing you like to do and you can do it in New York!" Karen, defending Katie, said their day of sightseeing had been more trundling around than actually seeing anything and it was a bit boring. Well, ok then. But still, New York boring? That seems a stretch.

As much as I will defend New York against such accusations, I don't find myself drawn to it as much as I have in the past. I will always love it and I enjoyed my time there, but the strong urge to move has diminished to a gentle desire. If it never happens, that's ok. After all, it's not like I didn't already live there for two years!

On Monday night, after her presentation and my discussion, JenA and I ventured out to see an obscure silent movie at the Film Forum. We ran into another old friend and he was surprised at our plan to go to the movies. I said, "You can see movies in New York that you can't see anywhere else." He agreed with that. And, unlike other places, when the movie lets out at 10pm (or 11 or 12), everything is still open. We took the train down to the theater, but missed the first show and upon seeing a long line for the second show, gave up the movie in favor of wandering Greenwich Village and SoHo.

We wandered until I spotted a French café and said, "That's the place." I had the cheese plate and salad. Jen had crème brulee. The best part was the wine, though. All of it was overpriced, but I enjoyed it.

After, I was in the mood for more drinking, so we stopped by a convenience store and picked up beverages to bring back to the room. Sadly, I only managed to drink half of the 16oz beer I purchased.

When we got back to the hotel, I took this pic: 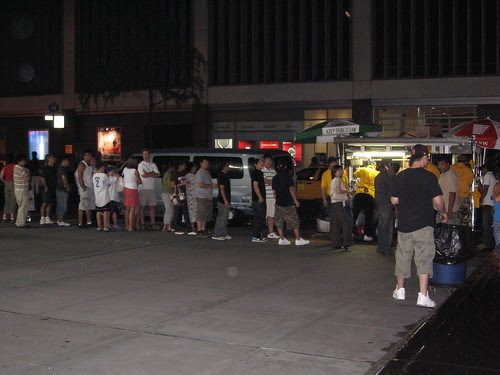 Every night I was there, a long line formed for this food cart. I have no idea why. Must have been tasty!

Jen and I took the subway to Penn Station and I caught a glimpse of this old signage as we walked into the station proper: If my mom talks about the subway, she'll call it the "BMT" or the "IRT." So will Uncle Marty. Those were the names of the lines from the days of private ownership. I'm not sure when the system became public and consolidated, but I'm sure those old names stuck around for many years after it did. Uncle Marty was calling the "1" train the "IRT" just a few years ago! (Maybe he still does.)

Leaving on a Tuesday afternoon meant plenty of space and quiet on the train. In a mere three and a half hours, I was home—and happy to be there.