On Tuesday, I'd told Spesh that I was ready to participate in some kind of action. The one he'd mentioned was canceled so he suggested we go visit a Palestinian town in the West Bank where his group, "Anarchists Against the Wall" is trying to stop the bulldozing of a Palestinian's land.

First thing in the morning, Spesh went to meet a student. I went to buy him some soap. The soap buying was a special kind that Spesh likes and I decided I'd get it for him as a thank you. (A meager one, but still.) It was a bit of an adventure since I only knew the name of the soap, not how to say "soap" or "do you have" in Hebrew. But, I managed. On my way home, I picked up a couple of pastries and a coffee. The pastry was so rich I only ate one. I didn't expect it to taste so good. Most of the pastry I've had in Israel is "parve" and tastes awful. Spesh arrived home later than I expected, but that was ok since I'd used the time to write.

The plan was to pick up the car around noon and drive to the West Bank. We decided to have lunch first and Spesh took me to a place with great hummus right around the corner. The thing is, I don't like hummus enough to eat a whole plate of it. Spesh seems to do this all the time. I don't get it. He ordered for me and I tried my best to eat it all. I barely got halfway through and I fussed a bit about it not tasting so great. Spesh said I was mistaken, that it was very good. I made a face.

I changed into long pants before we left--I will go that far to dress appropriately. I was wearing a t-shirt with a printed picture (of an elephant) and I asked Spesh if it was appropriate. He said, "Raise your arms." I did. "Ok." Why did he ask me to raise my arms? To make sure my shirt wouldn't rise up and expose my midriff or underpants. It didn't.

The fellow loaning us the car saved us a trip by picking us up at Spesh's place. We dropped him off and picked up another guy (a surprise to me) who is a photographer. He actually used a video camera on this outing--and I think that's what Spesh meant. I brought my camera and Spesh asked me to take a couple of pictures.

The cause of our trip was to help a Palestinian man, Sal, whose land in being encroached on by a settlement. Sal lives in a village adjacent to the settlement, but his olive tree grove is dead in the center of the industrial part of the settlement. Sal actually won a Supreme Court case to protect his land over twenty years ago. However, bulldozers have recently moved in the remainder of his parcel and Spesh's group has come to his aid by placing themselves, physically, on the land, though not usually directly in front of the bulldozer.

It was about an hour drive to the village, where we picked up Sal. He directed us to the site and point out a rock with red spray-painted markings. 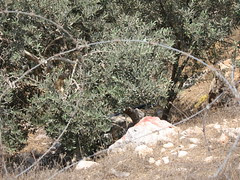 They supposedly signified the border and work was clearly being undertaken beyond it. Spesh asked me to take a pictures of the rock. Down a hill from the road, there were two Danes sitting on a big rock ledge, symbolically protecting the land. Just off the road, on top of the hill, was a machine (probably an excavator) with a pile driving attachment, breaking up rocks. 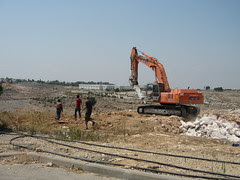 Um, whoops. Spesh put his hands on Sal's shoulders but he continued to yell at the operator. The operator yelled back, stopped the machine and got out. I stood back by the road and observed. The video guy came up to me and said, "Ah, he's Palestinian too--and he's driving the machine!" The video guy managed to piss off a couple of supervisor-types while Spesh and I were looking at the marked rock. The supervisors swore at him and told him to stop filming (all caught on tape). One guy drove off and the other called the police. 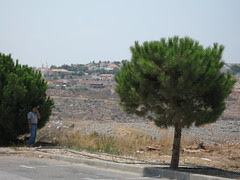 I went down the hill to where Spesh and the Danes were. 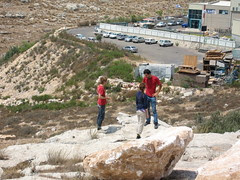 The dirt was unstable and Spesh held out his hand to help me down. Spesh had advised the landowner to make himself scarce. We stood around for a while, then decided it was time to go.

This was supposed to be a safe, non-confrontational action, but things were a little hairy. We beat it back to the car and the video guy waited behind while we picked up the landowner (hiding out in a warehouse nearby) and drove him back to the village. We dropped the landowner and the Danes off and went back for the video guy. When we entered the settlement, the gate was down--it had been opened when we first entered. However, it was opened for us without any questioning. We picked up the video guy and noticed a police van behind us. We headed back to the gate but the police van didn't follow us, rather it continued in the direction of the bulldozer.

We drove back to the village, loaded everyone in the car and drove to Sal's house. He set up a table and his older son brought out cups and bottles of water (not bottled water, but bottles filled with water that had been refrigerated). 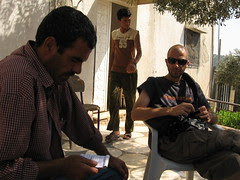 I wasn't sure of the etiquette so I sat and watched what others did. The video guy poured himself water but no one else did, so I refrained. The son then brought out a bottle of orange-colored water--something like kool-aid--filled cups to the brim and passed them around--first to the video guy, then me, then Spesh, then the male Dane and then the female Dane, and last his father.

Spesh, Sal, and to a lesser extent, the video guy talked for a long time in Hebrew about the border issue. 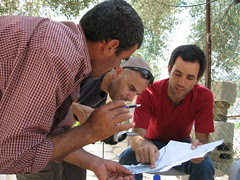 Sal brought out a packet of papers and, later, a small briefcase with more papers, documenting his court battle. He had several maps of the land and other documents in Hebrew and Arabic. Eventually, Sal's wife brought us coffee flavored with cardamom. Usually, I don't like to drink coffee at three in the afternoon, but I was falling asleep in my chair, and it would have been impolite not to drink. I drank happily--the coffee was strong and quite good.

After sitting and talking (or, in my case, sitting and sweating), we finally left. The landowner gave us some papers to take to a lawyer. We dropped the Danes off on the way there. We drove on to a town north of Tel Aviv and met the lawyer. More talking in Hebrew. I took the opportunity to pace up and down the sidewalk and take an auto-timer picture of myself covered in dirt from our adventures. 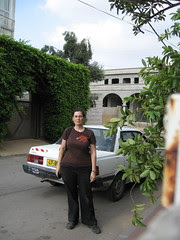 After that meeting was over, we stopped for some food on the way to Tel Aviv. It was good but I was almost too hot and tired to eat. My only request was no hummus. Spesh even ordered fries for me, since he knew I'd been craving them.

We dropped off the video guy then Spesh dropped me off at his place and took the car to its next user. That meant he would have to walk back alone. I assumed I'd go with him, but since we were already a couple of blocks from his place when I noticed what was going on, I just accepted the kindness.

I used my time alone to check email and take a shower. After the shower, I listened to music and did some writing. I expected Spesh home by 7:30 but he arrived nearer to 8pm. Our plan was to watch a movie. Spesh doesn't have a tv, but he has a computer--and movies can be watched.

Spesh walked in talking on the phone and continued talking while he took a shower. Unbelievable. When he came back out and started on the computer, I said, "When are we going to watch the movie?"

By 9:30, he settled down and said, "Ok, if you can stop delaying, we can finally watch the movies."

I laughed and then I said, "What's going to happen when your phone rings?"

He picked up the phone and turned it off. "That's how much I love you, J."

I smiled. I enjoyed the relaxing nothing of watching a movie after our long, tedious, stressful day. I think Spesh did too. When the movie ended, I picked up Spesh's phone and turned it back on, "That's how much I love you!" To my shock, he had only one text message. Turning off the phone was good.

You think that since I had to get up at 5am to get in a taxi at 5:30am so I could be at the airport by 6am to catch an 8am flight, I'd want to get some sleep and Spesh would let me. But that's not what happened. We turned off the movie around midnight and he paced around the apartment looking for something I could bring back as a present for C-money. Earlier, I asked to see a map of where we'd been that day--12:30 seemed like a good time to show me. I spent some time studying the map, which had the locations of roadblocks, watchtowers, the wall and the "greenline." It's not like the other maps of Israel that I've seen. Spesh kept wandering around and talking to me. His place is big, but there's no real privacy since the bedroom has windows (which are always open for ventilation) and a glass door. After 1am, he settled down to the computer and asked me if the typing would bother me. I said no and went to sleep for a few hours.

Though brief, it might have been my best sleep of the trip. Of course, it came on my last night there. Typical.