More tales from the sixth grade

After writing about my sixth grade "protest" I realized that I have a lot of stories from that year--what I usually consider to be the worst year of my life. Why the worst? It was the year my parents split for good and they fought almost constantly. We lived in three unpleasant places and the dog went crazy. Our row house apartment in Mt. Pleasant had mice, roaches and only one bedroom. (My parents bought the building, but didn't evict the other tenants, so we ended up in a one-bedroom second floor unit.) Even though I loved the city and the independence it granted me via the public transportation system, I had a hard time making friends and felt like a small-town outsider. The first summer we were there was one of record-breaking heat and the last summer wasn't much better. When I left, eventually moving to Seattle (a place I'd never even visited), I knew I would NEVER live in Washington D.C. again. As you know, I eventually changed my mind.

For most of my sixth grade year, I had a crush on Michael. He wasn't in my class of outcasts, but I spent a fair amount of time with him because we attended the same temple (hey Mom, I DO date Jewish guys!). The temple was not far from our school and we began walking there together once a week, on Thursday, to attend religious school. I didn't get to talk to him much otherwise, except occasionally at recess.

He was a blustery, popular boy with curly, light-brown hair. During our walks we'd have long "meaningful" talks and I thought that I was getting to know him. He confided in me that he used to smoke pot--way back when he was in the fourth grade. He'd since given it up. I told my mother this and she was appalled. I wasn't perturbed and it was good enough for me that he didn't smoke anymore.

One day, walking to Thursday school, we were teased by a couple of boys, "You love her! She's your girlfriend!" This enraged Michael and he chased them off with threats and a stick. I was embarrassed because I did like him and I wanted to be his girlfriend. He said, "Ignore those guys. They are assholes." I said, "Yeah, they sure are." But I felt terrible.

Michael's younger sister was a friend of mine, also through Temple. She knew I had a crush on her brother and constantly warned me that he was an asshole and to stay far away. I ignored her.

In the spring, a couple of months before the end of the year, Michael asked me on a date. I remember carefully choosing my outfit: a navy t-shirt with a band of vertical white stripes and my baby blue carpenter pants. Below is a pic of me from that year, wearing the shirt in question. I'm on the stoop of our house in Mt. Pleasant. (If you are a long time reader, you may have seen this pic before.) 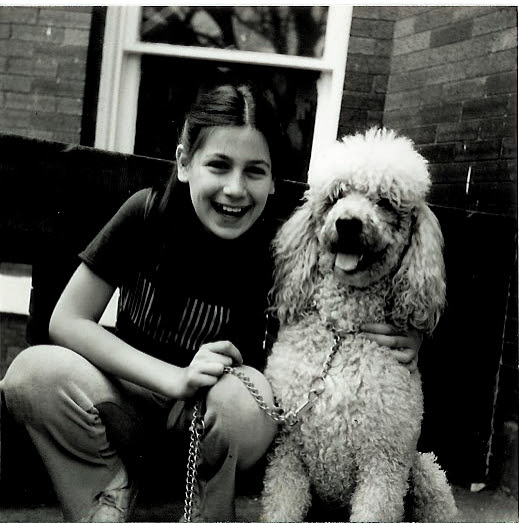 Our date was to go roller skating. As it happened, I was the proud owner of a pair of white leather skates with translucent red wheels (I still own these skates, and they still fit, more or less). They made the outfit pop. Michael's mother drove us to the skating rink and I had the distinct impression that she didn't like me. Why, I have no idea, since there wasn't any risk of me corrupting him. After she dropped us off, we skated, did a little hand holding, ate some ice cream and that was it.

Michael asked me out again for the next weekend--this time to a movie. I remember the movie, "The Legend of the Lone Ranger," but I don't remember my outfit. During the movie, he put his arm around me and asked if he could kiss me. I said yes. Then he stuck his tongue in my mouth. It was...unpleasant. Michael had braces, which made it a little uncomfortable, but the real problem was that his tongue was a mushy, directionless blob. Icky. It was so unpleasant that it turned me off of french kissing for over a year. (More precisely, I was still turned off when the next french kissing opportunity arose, about a year later).

After the movie, we went to a party hosted by Michael's friend, John. The parents were upstairs and the party was in the basement. The kids were playing spin the bottle. In fact, it was the only party I went to that year. I was a new, not very popular kid in the misfit class. The misfits did not host parties.

Michael asked if I wanted to join the game. I hesitated, but I wanted to play--it would be a first for me. Spin the bottle was something out of a book; I hadn't realized that kids actually played kissing games. Before we started playing, Michael whispered something in John's ear. They looked at me and laughed. When John spun the bottle and it pointed at me, he tried to slip his tongue in my mouth when he kissed me. I resisted and I felt sure Michael had told him that I'd "let" him kiss me, with tongue. I stopped playing the game and I did not want to be at the party anymore.

Not long after the party, there was a sleepover at the temple. It was on a Friday night and all the kids attended services together first then bunked down for the night in the building. My grandmother, with whom I share a first and last name, had died recently--less than a week before. My father had gone to California for the funeral, leaving my mother and me in DC. He still wasn't back and my mother was having a hard time, which might explain why she sent me off to this event.

At the end of a Jewish service, names of those who have died in that season, recently and in the past, are read before the final prayer, the Kaddish, is recited. Because the Kaddish is the closing prayer for services it has also become the prayer for the dead. On this particular Friday night, to my surprise, my grandmother's name was read. It was shocking, not only because I didn't expect it, but because it was MY NAME.

After the service, I found myself walking next to Michael, down the main aisle of the sanctuary. He made a crack about my name being read, "Are you dead? Why did they read your name?" He laughed. I don't recall what I said, if anything, but I do recall swinging my arm back and hitting him, hard, with an open hand, in the center of his back. He stopped walking. He was stunned and shouted, "Bitch!" and walked quickly away from me, out of the sanctuary. I was stunned myself because I'd felt anger and then, wham, I hit him, but I hadn't consciously decided to hit him. A couple of the girls heard and rushed up and asked what he'd done. "I don't know. He made a joke about my grandmother." I found him and apologized, even though I couldn't explain myself. He seemed to let it go.

Michael and I talked on the phone after that and I thought, for certain, that we would have another date. (Why I wanted another date with him is shrouded in mystery.) Instead, he gave me what I still consider to be one of the greatest break up lines of all time, "I want to be free for the summer."

I was infuriated and argued with him for a minute or two and then hung up in exasperation. Eventually, I came to the conclusion that his sister was right and that Michael was an asshole. A fully formed twelve-year-old asshole.

Right before school ended my parents split for good. My dad packed up and moved to California and Mom and I went down to Knoxville to claim some possessions from the house we still owned there. We returned, briefly, to DC and I called Michael's sister and commiserated with her about what an asshole her brother was. She said, "I warned you!" I said, "You were right! I didn't understand." And then I went off to spend the summer in San Francisco with my father and I never saw Michael again.

I don't care in the least what happened to Michael, but I don't wish him ill either. I only wonder why his mother didn't like me. I'll never understand that.