Of men and stripes

All it took to get me rolling down memory lane was hearing the name "Karsten."

A couple of weeks ago when I was in Seattle, Amanda was telling me about her cute, married physical therapist and she said, "He knew all those guys—Frank, Nick, Karsten...." Frank is her long-ago ex-boyfriend—the one she broke up with right before I met her.

The night I met Karsten, Amanda and I planned to go to a couple of Halloween parties. We picked costumes that required us to dye our hair blonde. She was going to be Madonna and I was going as Cabiria. I know you don't know who Cabiria is. No one else does either. In fact, I carried around a book the entire night—a biography of Fellini—with a picture of Giulietta Masina dressed up as Cabiria. 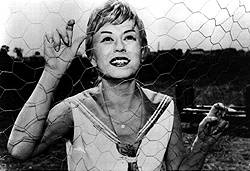 Both Madonna and Cabiria are bottle blondes and Amanda and I thought it would be fun, for once in our lives, to go blonde. My hair is very dark brown—and Amanda's is just a couple of shades lighter. When I got to her Capitol Hill apartment, it was around 7pm. I read the instructions on the box and I realized, with our hair color, it would take many hours for the bleaching to work. I said, "I don't think we're going to have time for this."

"It's not that I don't want to, but if we do this, we won't get to the first party until midnight. And I want to go to both parties."

We did not dye our hair. I recall Amanda's costume consisting of a short skirt and several strands of cheap beads. There were probably also fingerless gloves, this being early Madonna. And, as her comment on a recent post indicated, tissue paper falsies.

The first party was in the U-District, over on 7th ST & 50th. I knew everyone who lived in that seven-bedroom house. I even roomed with some of them eventually.

If someone asked who I was, I showed my picture of Cabiria. I looked remarkably like her. I had the same haircut, big eyes and round face. I did my make up to match hers—in particular crazy, slanty eyebrows. (I did not pluck, I put a lot of foundation over part of my existing brows and drew new ones.) I bought a shirt with wide horizontal black and white stripes (I still wear it on Halloween sometimes). I wore a black skirt and my socks with narrow horizontal black and white stripes. It was perfectly whorish and innocent—just like Cabiria herself.

When we got bored with the first party, we moved on to the second one. This group house was full of Amanda's friends. Including Frank.

The second party was a lot livelier. A few of my friends were there as well, which I hadn't expected. One of them explained to me what a "fuck me" look was, citing a particular woman as an example. Whatever it was, I sure didn't have it.

I called Karsten a couple of days later and we planned to go to the movies. I was working at the movie theater and he decided that I should get us into the U2 concert movie for free. There were some problems with this. First, the movie had just opened and it was very popular. Normally, employees couldn't get passed into shows on Friday or Saturday nights, and never if the movie was popular. Second, I didn't like U2 enough to see their concert movie. We had this conversation while we stood in line:

I said, "Do you mind if we see something else?"

"I really want to see this movie."

"I can ask, but it's not going to work. We usually have to call ahead."

I asked and was refused, so we paid. (I assume we went Dutch.) Afterwards, we drove to his house to get something to eat. Yep, he was too cheap to pay for food. Over leftover quiche and his joke about "Real Men Don't Eat Quiche" he told me he'd just broken up with a serious girlfriend.

"So, I have to tell you, I'm acting a bit like an asshole these days."

I went home without kissing him again. A couple of days later, I called him and anxiously waited for him to call me back. When he never did, I decided he was an asshole.

The guideline is: when a guy tells you he's an asshole, believe him.

At least that's what I thought until I told Mom the story the other day. She said, "He was doing you a favor. He wasn't attracted to you and he gave you an easy out—just blame him for being an asshole."

Well, damn. I bet she's right. Maybe he wasn't an asshole. But I still like my version better.

Grateful for: getting the message.