When I got home last tonight I saw two police officers and a cruiser parked behind a black sedan across the street from my place. It looked like a typical traffic stop.

The lights were flashing, but that would be normal for traffic stop. I took note and went into my house.

Maybe ten minutes later, I heard yelling and indistinct swearing--I could tell it was swearing by the tone.

I looked out my window and saw that the two officers now had two people, a man and a woman, on the ground by the car. All the doors of the car and the trunk were open. The man was on his belly, yelling and struggling with the officer who was standing over him. The woman seemed calm, but was lying on her back, legs in the air, slightly akimbo.

Then the woman, still on her back, kicked at the second officer. Right about then, two more cruisers showed up and two more police officers rushed to help their colleagues. One was a slim, attractive woman and she helped subdue the woman on the ground. The female officer looked just like the hesitant rookie cop on season five of The Shield.

The police got the man on his feet, then the woman. Both were handcuffed. A crowd had gathered and more cop cars showed up, including a van and an SUV marked "K9." I counted a total of ten police vehicles on my little block.

Here's a couple of crappy pics I took through the windows of our outer door. I was too chicken to go outside. 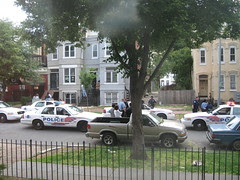 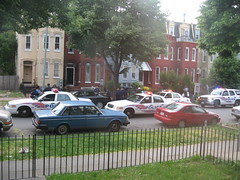 The two suspects (suspected of what, I wonder?) were eventually put in a car. One officer angrily told the crowd to get off the street and get on the sidewalk. The other officers seemed to be having a good time hanging out and talking to each other. After maybe ten minutes, the police thinned out, but I saw a few cops hanging around interviewing witnesses (to what? the confrontation between the cops and the suspects? or the original suspect activity?). Much later, I heard a tow truck haul away the black sedan. It was gone this morning.

Ah, my neighborhood is so much fun!

Grateful for: a strong police presence.