On Saturday, I was very efficient. I got up rather earlier than I would have liked because Tabitha (the cat) woke me at 3:45am. What the hell was she thinking? I had to shut her in the bathroom so I could get some sleep. Still, I was up before 8am.

In the morning, I tidied the house, folded some laundry and ate breakfast. At 12:30 I walked myself to the neighborhood yoga studio for a free "Yoga Week" class. It was ok, but irritated my sore right wrist and shoulder.

I stopped by the library on the way home in search of the book group book, but it was not to be found. I also picked up my dry cleaning.

Once home, I had a light lunch and roused myself to drive to Baltimore to meet a friend for the Orioles-Mariners game. (The Mariners and my brother (the one from Israel--he's in Baltimore a couple of times a year for business) are the two things that will get me to Baltimore reliably.) I got going about 15 minutes later than planned, but still in plenty of time. When I went out the back way, this is what I saw: 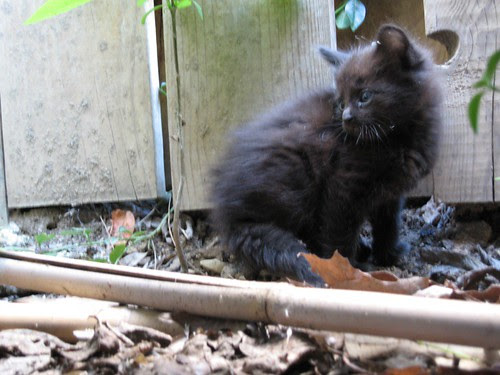 I turned around and went back into the house to get my camera. I also got some food for Mom, because she was out there too--hanging out underneath our gas grill, where the kitten retreated when I approached. 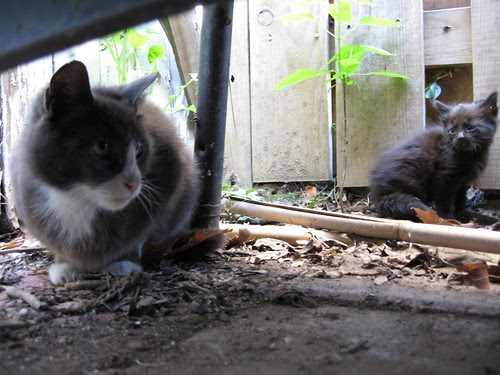 There were actually two kittens (I used the flash so the colors are completely different). 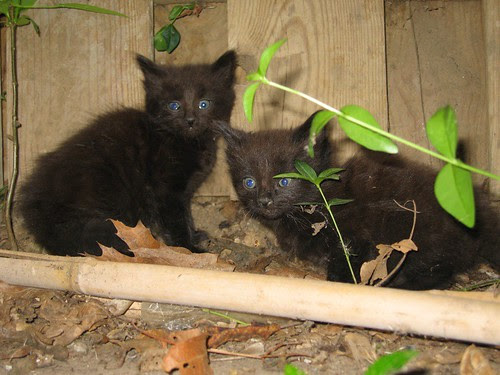 The grey and white "mommy" has been hanging around our back yard all winter along with a black long hair (daddy?). I saw both of those adult cats today, but not hide nor hair of the kittens.

I was over an hour late to the ballpark, but it was because of horrendous traffic on the Parkway. It was slow enough that I was able to take this pic: 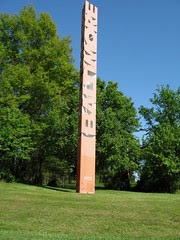 The game was good fun and I enjoyed seeing my long lost grad school acquaintance, Nancy. She is funny and kind, but I can only hear about half of what she says because she speaks so softly. Ah well. It was good to have good company. You never have the best conversations at the ball park anyway.

For today, I had big plans. I was going to get up early, go for coffee, drop in on the "Save Darfur" rally and then make the second game of the ultimate frisbee double header.

Well, I did go for coffee, rather later than planned. When I got home, I was so exhausted, I could barely move and I crossed my two other plans off the list (sorry Travis). I did manage to nap, mop the kitchen floor and cook some dinner. I MUST go to sleep early tonight so I can get in a full day's work and a full evening's rowing practice on Monday.

And if the Kyle moratorium is ever lifted, there is an even funnier story to tell. We did talk on the phone, very briefly, but since we haven't met, I'm not going into detail yet. The fact that this mini-non-saga is still going on amazes me.

Grateful for: a decent weekend.
Drop me a line.
Posted by Jamy at 7:33 PM