I need to say thank you to a few people.

First, thank you to the lovely Os who took care of Tabitha the cat while I was gone. They welcomed her to their house and their cat was even reasonably accepting of Tabitha. Ms. O even sent me a couple of email updates while I was gone letting me know how Tabby was getting along. Just fine, as it turned out.

And if that weren't enough, Ms. O actually drove Tabitha home on Wednesday--and brought me a couple of cans of food for her since the supply I'd provided had run out. Wow. Talk about above and beyond. I thank you. Tabitha thanks you.

Second, thanks to Pele who brought me Chinese food last night. I was home yesterday and didn't take a step outside the house. I IM'd Pele that I wanted Chinese food. She responded that she had her lunch in the fridge (their office had gone out for lunch) and it was beef with broccoli--and she would bring it over after work. And she did--along with ginger ale (at my request) and orange juice (on her initiative). She even gave me the pudding from her lunch. She said, "I knew you wouldn't turn down chocolate." Thank you, Pele, for taking care of me while I am sick. 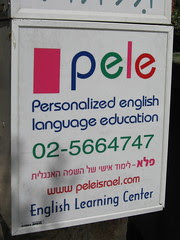 Third, thanks for all the "feel better" comments. You all are so sweet! I am still sick, but it's just a head cold. I don't even have a fever. It's just congestion, runny nose and some aches and pains. No, I don't love it, but I I'll be fine in a couple of days.

I am looking forward to doing almost nothing this weekend, though, and finishing up the Israel story. Look for a link to another installment later today. The laundry is underway as I write this.

Last, I'm sort of liking my jetlag. Crazy, no? It is getting me to bed by 10 or 11pm and up before 7am. That is a better schedule for me than what I've been following for the last year or so. I want to stay in this rhythm. Except--daylight savings time starts tomorrow. Well, at least I'll be up by 8am. That's something.

Grateful for: good friends.
Posted by Jamy at 10:19 AM