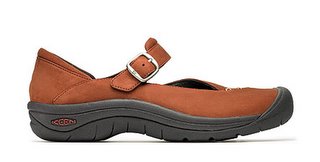 When I was in Seattle last October, I bought a pair of shoes. This is not an uncommon occurrence. There is a particular store in Wallingford where Mom and I end up and they have a good selection of comfy, expensive shoes. This time, there was a sale and I found a pair of Keen shoes that fit and were cute--sort of. While I'm a bit fan of comfortable shoes, I don't care for ugly shoes. I don't like Birkenstocks and I've always thought Keens were, well, not so keen. But, these didn't have the big black strip on the toe and they were bargain priced, so I figured why not. My only objection was that they were red-ish. I buy almost exclusively black shoes. They go with my collection of almost exclusively black slacks. I have sandals and sneakers of many colors, but day-to-day shoes are black. Anyway, my mom hates my penchant for black and because this pair was red, she encouraged me to buy them. And buy them I did.

I wore my new shoes around town for a couple of days and I noticed a problem. The right shoe was too short. My toes were hitting the end when I walked. The left shoe was fine. As is true for most people, one of my feet is slightly larger than the other--but it's my left foot. So I knew the problem had to be the shoe itself. The shoes were marked the same size, and they looked the same but I thought I could detect a tiny difference in length. And I could feel the difference. I decided to take the shoes back and see if the store would help me out.

The lady at the store said, "If you hadn't worn them, maybe we could have done something."

"But it's clearly a manufacturer's defect." I said, plaintively.

"There's nothing we can do. I don't see a problem." She examined the shoes, checking for a difference in length. "The look the same to me."

"They don't feel the same." I said, "You can't send them back? I mean if the problem is how they made them, the manufacturer should replace them."

After that thoroughly unsatisfactory experience, I took the shoes back to DC. It occurred to me to get in touch with Keen directly. I wrote an email and explained the problem. Within a week or so, I received a response telling me to expect a call. In a few days, I got a call from Peg, who worked at Keen. She let me know that they would arrange for a local (DC) store to make an exchange for me. I was delighted. Peg said, "Call James at [local store] and he'll take care of it."

The next day, I called James and I brought the shoes to his store after work. This was shortly before Thanksgiving. James gave me his card and said I should call in a week or two.

I called. Nothing. I waited. And called. James was not there. I called. I left my number for James. I waited. Then I forgot.

Many weeks later, well into January, I remembered. I stopped by the store and, by chance, James was there. He said the folks at Keen hadn't sent him the replacement shoes. "We don't carry that kind."

I said, "I know. I thought they were supposed to send you a new pair."

He seemed to blame me for not telling him what kind of new shoes I wanted. I figured that would be obvious. I was confused.

James said, "I don't even remember the lady's name. Do you have her number?"

"I remember. Her name is Peg. I have her number at my office. I can get it tomorrow."

"Call me and give me the number and I'll get in touch with her."

"It's better if I call her." James assured me. "Sometimes they can be funny about that."

When I got to the office the next day, I found the woman's number. I called her myself. It's true, I didn't completely trust James. Peg didn't remember me, but with enough information and a few dates she found me in her records. She said, "I'll call James and get this sorted out. I'm really sorry." I thanked her profusely.

The next day Peg called and said the shoes were on their way to James' store.

So I waited. And called. And waited. And called. I called three times this week. Unless James was there, no one knew what I was talking about--no one could find the shoes. The person I spoke to on Wednesday said that James was working on Friday. I called on Friday before I left work and James was there. He said the shoes had been there for a week and a half but he didn't have my number. I said, "I've called, but no one knew what I was talking about." 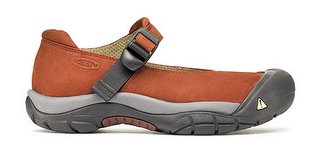 I stopped by the store on my way home and picked up the shoes. It's only been four months. They are not the same model as I bought originally--that kind is discontinued. This pair is fabulously ugly with a huge black toe cap. What's the deal with the exclamation point inside the yellow triangle? I wish I'd ordered black instead of "garnet." Peg talked me into them. She said they were very comfortable and that the black looked dull. But, Peg, black goes with everything. When am I going to wear ugly red shoes?

I sure hope they fit.