I've mentioned this before, but my mother has been sending me stuff for the last few weeks. The stuff consists of all the things I left in her care when I went away for grad school. I did not have my childhood room preserved in amber. I moved to the dorms when I was 16; Mom moved to a houseboat the next year. Because her new place was so much smaller than the old place, I had to get all of my stuff out. And I did.

A few years later, Grandma died and I asked for her china. Mom agreed to keep it for me. I moved to NC and I left a few other things with Mom. Recently, without asking me, she started sending me the things.

First came the dishes. Then came a couple of books that are in her field but that are of interest to me too. I didn't ask for them and I hardly need more books, but it's fine. They are good books to have. Then the stamps. I had a small stamp collection as a kid (all cancelled stamps). I thought they were long gone until they showed up in the mail. I shipped them back to Seattle because my friend Amanda's son said he wanted them. And, finally, the painting.

A few years ago, as a birthday present, Mom sent me two paintings and the one she just shipped goes with them--the style and subjects are similar.

These are the two small paintings: 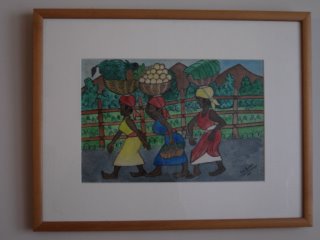 This one used to hang in my childhood room 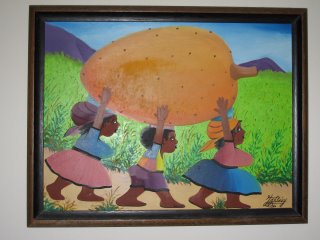 A week ago Sunday, Mom sent me an angry email telling me I should write her a thank you note and saying she didn't need my guilt. How was I to respond? I usually fall on my sword when I get an email like that from Mom, but if I did that, she'd just say I was playing the guilt card. So I was honest about how I wasn't thrilled to be receiving all the stuff, but that I would get around to showing her the appropriate appreciation if she would give me some time. She didn't take that well. Here is part of her response:

I have trouble with the contrasts in our lives at your age, and what I perceive in you as self-absorption. It is nobody's fault that I had a lot of responsibilities when I was in my 30s. I am not proud of that feeling, but it is just there.

You are an admirable person and have sufficient social conscience. it's too bad you don't like me more. I need more positive feedback. Presumably you do too, and I am not giving you that.

My response was to tell her that it made me sad that she thought I didn't like her and that it wasn't true. Also that she was sending me things on her timetable, not mine, and I needed a chance to catch up. She finally got it and wrote an understanding message--one promising patience. We haven't spoken on the phone yet, but I'm not dreading it. I assume I need to make the first call.

I wondered, is this really all about the painting? I answered myself (perhaps Mom is not the only crazy one), that it's not really about that. It's about the blog.

You may recall that I set up a "mom-safe" blog back in January for my movie-related writing (no, I haven't been posting there). I sent Mom the URL. She was annoyed that I didn't share the "real" blog with her, so she waited a few days to check out the movie blog. When she did, she found a link to my blogger profile (which I had removed). She clicked through, found Grateful Dating, and read a TON of it. She even left a comment on this post (is it a coincidence that the title of the post is 'all movies, all the time'?). Then she called me up and told me she'd read it. You could have knocked me over with a feather.

I madly loaded the site and hunted and hunted for the profile link. I'd commented it out on the template, but I went back and deleted it. I IM'd a friend while I was on the phone with Mom and asked him to tell me if he could see the profile link. Neither of us could find it. That damn link only showed up so that Mom could see it. And, when she found it, she took it as my tacit approval to read the blog. Oh, the little lies we tell ourselves.

Mom seemed to like the blog, which was good, but I was too stunned to say much to her.

Later that day, she sent me a note and said that if I didn't want her to read the blog, she wouldn't. I responded that I was ambivalent about it, but if she could stop reading for the time being, I would appreciate it. And we didn't mention it again.

I can only think, though, that her recent burst of anger is related to the blog. Not the content of the blog--she knows most everything that is going on with me--a good deal more, in fact, than I write about---but the fact of the blog. The fact that I have a whole life that has nothing to do with her.

The last time we had a fight where she accused me of not liking her and claimed not to like me (which is really the height of absurdity), the trigger was a boy. I'd come to Seattle for a visit, the primary purpose of which was to see a guy--Owen, the one I met at New Year's Eve. We'd stayed in touch and I'd seen him on one other Seattle visit. He did not ask me to come, but I have my mom there and my friends, and, well, there is always a good reason for me to go to Seattle.

But Mom kind of freaked out. She got angry at me. She felt put upon. It's not like I didn't spend the majority of my time there with her. But prioritizing someone else--it was too much.

Another line in the email above (not included) says that I, "should not expect automatic hospitality with [mom] at [my] convenience"? What does that have to do with the damn picture? Nothing. It has to do with the visit I made many years ago that was not primarily to see her. And by extention, not prioritizing her. After her freak out those many years ago, I've been ultra conscientious on each visit home . I let Mom know in as far as advance as possible when I'm planning to see my friends--and I try to make plans with Mom first and schedule friend time around her. So, I've been good. I haven't always been Mary Sunshine when I'm home (or when she's here), but you really can't accuse me of being inconsiderate.

It didn't occur to me at first because I was so busy being offended at being called "self-absorbed," but maybe Mom is jealous. That seems crazy. First, I have plenty of responsibilities--and shouldn't she know that? Our lives are rather similar. She had everything I have and more. She had a husband and a kid. A career, a house, a car and a two dogs at my age. A few years later, she didn't have the husband or the dogs, but she had all the rest. I want all those things. I can't tell you why I don't have a husband, a kid or dogs, but it's not because I'm self-absorbed. It's not for lack of wanting. Or trying.

Of course she still has me, no matter what, forever, no matter how hard she tries to send me away. I just wish she would stop trying so hard.

I do think things have settled out between us, at least for the time being. Our fights are less frequent and of lower intensity these days, which is certainly something to be grateful for.

For your viewing pleasure, here are some pictures of the new painting and its companions.

My wall before hanging the new painting 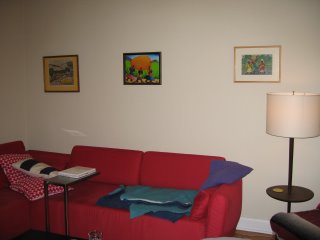 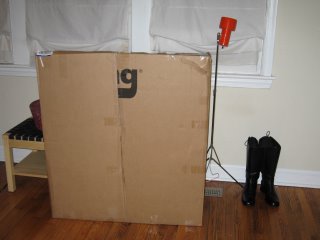 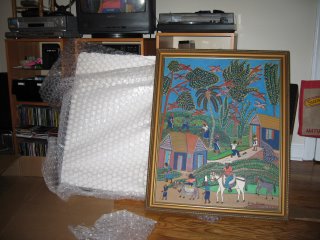 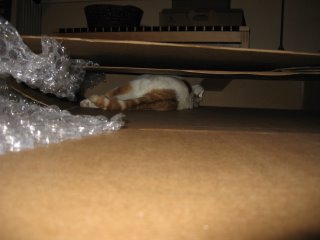 The wall with the new painting 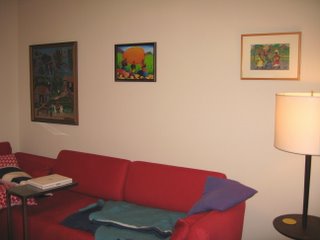 Another view--The picture on the far left, which is a framed batik, also hung in my childhood room. When I moved to my first apartment, I didn't ask for it, I just took it. 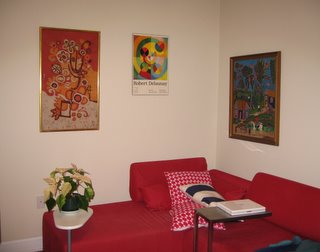 Grateful for: my new painting.
Drop me a line.
Posted by Jamy at 4:00 PM