How was my New Year's Eve? It was fine. I've had worse and very few that were better. If I were to stack it up against any other Saturday night out on the town, I'd say it would rate a good. Or a very good.

It was a two part evening. Part one was a trip with Pele to Art Romp 18 at the Warehouse Theater. This event, and the 10pm show of The Lobster Boy Review, was my first choice for NYE. But no one wanted to go. Pele and I saw all the art, though, and it was a good show. The works ranged from whimsical and beautiful, to thought-provoking and offensive. On the top floor of the gallery, a man started talking to me. He was in his mid-thirties with a slight build and looked to be of South Asian descent. He asked, "Are you an artist?"

"That's good too. I'm an art collector. It's an obsession. An expensive one."

"Oh my. Too rich for my blood." Pele and I slipped away to the next room.

A few minutes later, I sighted my art collector chatting up another woman. I said to Pele, "I don't feel special anymore." A young man was standing in the room with us and said, "What?" He thought I was talking to him. I stumbled over my words, "I wasn't...I didn't...sorry about that." He laughed.

Pele said, "She was talking to me."

I said, "I know it was strange, but she knew exactly what I meant."

We chatted with this sweet, dreadlocked young man as we walked to the next room. We went back to the café and drank a glass of free art gallery wine, took a seat and watched the cool-kids and artists. If they hold this even again next year, I may just go on my own.

Part two of the evening was dinner with a large group at the Moroccan restaurant, Marrakesh. 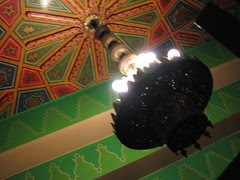 For a set per person price there was a seven course meal, champagne at midnight, belly dancing and a DJ. Annoyingly, the actual cost of the evening was about 30% more than expected because tax and tip were not included. Also, the DJ was the worst I have ever paid to hear.

Even so, I had a good time. The belly dancer was good. It didn't hurt that the bar served me possibly the strongest gin and tonic I've ever had. Things were a pleasant blur from then on. 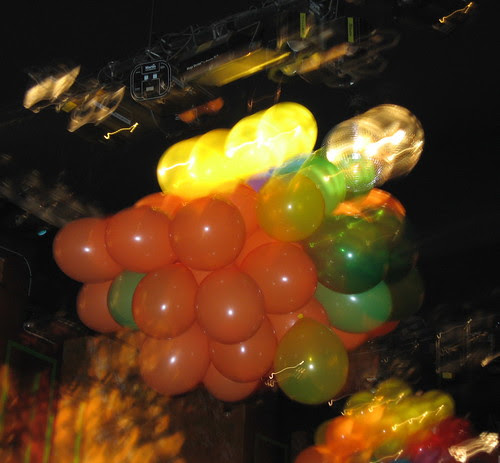 One of the women in our group asked for an extra glass of 7-Up with her drink because it was so strong!

The food was good and the company was friendly, including the people I met for the first time that evening. Pele and I sat together most of the night and even though we didn't talk that much, the whispered asides and later rundown made the night much more fun. We also managed to catch the bus there and home, saving over $20 cab fare. I love saving money. 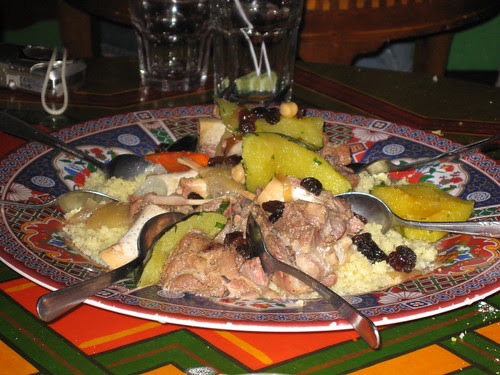 A precious DJ moment. "Now a song for lovers!" And then he played the Byrd's version of the House of the Rising Sun.

I danced a little, didn't drink too much, ate not to excess and stayed up late talking with Pele. A good night overall. 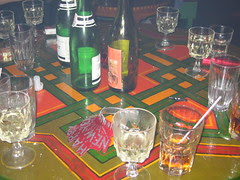 Not a bad way to start the year.