Yours, Mine and Lunch

Friday
I went to see "Yours, Mine and Ours" with work friend, Nancy. (Remember the contest?) It turns out that Nancy has the same love of blended family type of films (and the same complete lack of interest in Cheaper by the Dozen, despite the presence of Steve Martin) as I do. Don't know what her excuse is, she comes from an intact family. They let us off work at noon and we went straight to Union Station. We got there in time to pick up lunch to eat in the movie. Nancy surprised me by buying my ticket ("Happy Holidays!"). As we walked to our theater, we were a little concerned by the mobs of small children surrounding us. We had nothing to be worried about--they were all there to see Narnia or Harry Potter. We had the theater completely to ourselves and chatted and heckled loudly through the entire film. I had very, very low expectations and was completely satisfied by the experience. A pig played a supporting role in the film causing me to say more than once, "Everything is funnier with a pig."

After the movie, I came home and baked cookies. Yes, more cookies. This time, not chocolate chip, but a variation on the wafer thin butter cinnamon cookies my mom used to make. Instead of cinnamon, I used cardamom. I love the flavor of cardamom and I made this variation of the recipe because I was bringing them as a gift to an Indian pre-wedding party called a Sangeet (it was combined with a wedding shower). (Aside: can you believe I have never been to a wedding shower before?) I roped Spesh into going with me, and he met me at my house and we drove from there to Vienna, VA.

On the drive there, we discussed the issue of privacy and the blog. I told him I didn't mind not being anonymous, but I had to be careful about what I wrote so as not to offend people. "Anyway, today I didn't get to write at all, I've been so on the run."

"So true! Then again, I can write about almost anything, so I just need to keep things boring."

The party was fun, but a little awkward. I was invited by the father-of-the-bride and I've never met the bride. Everyone was extremely friendly. Most of the women were in traditional dress-- sarees, lenghas, and salwars. Most of the men were in suits--basic western-style men's wear. Most of the women were downstairs participating in the Mehendi ritual. (I declined.) After the bride started opening presents, I moved myself back upstairs to check on Spesh. I also got to eat some of the tasty Indian buffet.

We left before the dancing started. The cookies were not set out. Our host offered us food to take home and we declined, but on the way out the door, he thrust a plant into our hands. It was a decorative poinsettia. It was impossible to refuse, so we didn't. Did I miss an important cultural cue? Oh well.

I was wiped out--why? I don't know. Spesh spent the night on the couch. I went to sleep early.

Saturday
We met friends for lunch and a screening of the new Bob Dylan documentary, No Direction Home, on dvd. We went to TR's house because he just got a new fancy tv and one friend is allergic to cats. TR is out of town and lent me his keys (car and house!). It was a great film, but a bit of a marathon (over three hours long).

You might think I'd had enough of the movies, but you would be wrong. After I dropped Spesh off, I met a friend to catch a movie.

Monday
I finally managed to pin down the little sister (not my actual sister). I gave her the choice of bowling or movies and she chose movies. A girl after my own heart. We saw Narnia and she quite liked it. I loved the books as a kid, but I didn't remember the details of the story. The movie was fine. I find that I'm able to relax my standards quite a bit for the little sister and enjoy almost any movie we see together. (Miss Congeniality 2 might be an exception.) After the movie, we had Chinese food and fooled around with my digital camera. She made a movie of me and we watched it at the table. It's ridiculously fascinating watching a movie of yourself, even if it is quite possibly the most boring movie in the world. She was shy about letting me photograph her. 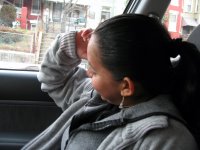 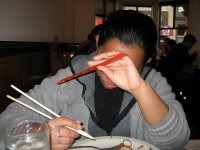 I wasn't as good at hiding. 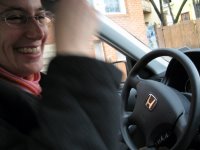 On the way home, I stopped at the grocery store. The day after Christmas is an excellent time to shop. No crowds, short lines and only slightly unhappy cashiers (the woman on my aisle was very friendly, but she didn't look happy about having to work). The million bags I brought home provided a temporary playground for the cat. Did you know that cats love bags? 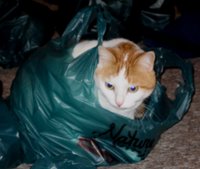 Grateful for: movies, friends and bags.
Posted by Jamy at 10:59 PM